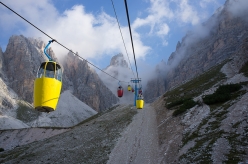 The Staunies lift in summer
Photo by Francesco Tremolada 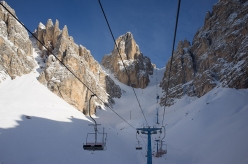 The Staunies chairlift in winter
Photo by Francesco Tremolada 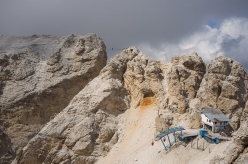 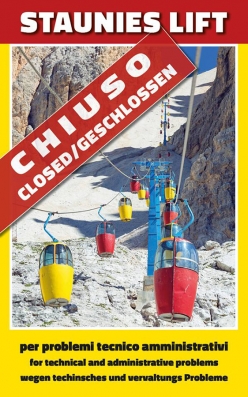 The historic Staunies lift, closed as of 24/07/2016
Photo by Faloria Cortina

The Staunies lift that leads to Monte Cristallo in the Dolomites was closed on Sunday, July 24 2016 until further notice due to 'technical and administrative problems.'

The historic lift that leads up to Col Staunies, in the heart of Monte Cristallo, was closed on Sunday, 24 July until further notice. The lift was originally built for the 1956 Cortina Winter Olympics, just in case other lower-lying pistes didn’t have sufficient snow and, after various renewals to the operating license, due to the age of the lift on 25 July 2016 a final appeal was dismissed, with which the operators hoped to receive further authorization to run the lift.

The lift - a cable car in summer and chairlift in winter - leads from Rifugio Son Forca above Cortina d'Ampezzo to Forcella Staunies at 2919m and Rifugio Guido Lorenzi, starting point for some of the most famous and popular vie ferrate in the Dolomites, namely via ferrata Ivano Dibona and Marino Bianchi. Those intending to walk these routes now have to first deal with the steep 700m approach. It’s worth noting that in winter the path that leads to the col is covered in snow and that the Staunies piste is considered the steepest in the entire Dolomiti Super Ski arena.

Currently the company that operates the lift is considering for alternative solutions, such as replacing the cable car at an estimated cost, according to Alessandra Segafreddo of Corriere delle Alpi, of circa 7 million Euro. Projects of this sort need time. In the meantime, as the lift operators write on their facebook page, the lift remains closed due to “technical and administrative problems."