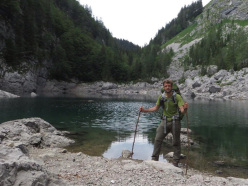 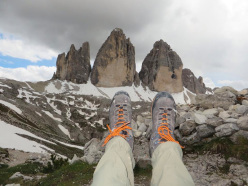 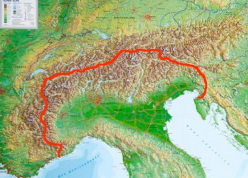 Ivan Peri Across the Alps: an 80 day dream

Ivan Peri isn't a fictional character, nor did he start his walk for a bet. He simply wants to fulfill his dream of walking across the Alps in 80 days. By Teddy Soppelsa for Good For Alps, magazine AKU trekking & outdoor footwear.

In 1873 Jules Verne published one of his most famous books: "Around the World in Eighty Days." Since then, the adventures of the wealthy Londoner Phileas Fogg and his French valet Passepartout, who bet they could travel around the world in 80 days, continue to inspire writers, novelists and adventurers in every corner of the globe.

Walking across the Alps in 80 days is one of these beautiful adventures and young Ivan Peri, from Italy's Livigno, is currently living out his dream. We joined him at Unser Frau in Schnals (1500 m). He put his heavy rucksack on the ground and we gave him just enough time to catch his breath and have a sip of water before asking him some questions.

Hi Ivan, so tell us who you are and what you're doing here?
My name is Ivan Peri, I'm 37 years old and live in Livigno. I work as a ski instructor in winter, teaching people of all nationalities how to ski, while in summer I work as a mid-mountain leader and accompany people to discover Alta Valtellina and Switzerland. Sport, nature and the mountains are my life (Ivan has a degree in Sports Science and Physical Education, ed.) During my leaders course I made several ascents with Ismael Santos Rodriguez, a great Spanish friend who at that time was climbing all the 4000m peaks of the Alps. I'm here now to fulfill my own dream: "Across the Alps in 80 days." I've yearnt to do this for years and the dream became even more important after I transformed one of my loves, the mountains, into a profession.

When did you leave?
I set off on 12 June from Trieste and expect to reach Monaco in late August, after 80 days and having walked for at least 2000 km and ascended circa 120,000 meters. I'm mapping my walk with a GPS and at the end we'll see...

Which route are you taking and how did you organise it?
The route almost immediately crosses from Italy into Slovenia and then continues along the Italian-Austrian border. From here I'll walk along the borders of Switzerland, France, Italy and Monaco. For most part of the walk I'm autonomous. I've got a tent and a sleeping bag and, only if really necessary (also due to economic restraints) will I sleep in mountain huts, hostels, etc.. The paths I choose always lead past places where I can buy some food. Wherever I go I collect maps and information about the local area so that I know exactly where to go, about the current snow conditions or other unforeseen events.

Apart from your dream, is there anything else that helped you decide to give it a go?
It's a personal challenge ... and then I just said to myself: "Ivan, try in now. It's now or never." When I get back I want to build my house and I won't have any time to spare. I chose to cross the Alps because I think this is one of the most beautiful places on Earth, with such a huge and truly remarkable variety of habitats, people, flora and fauna. Walking is the best way to see all this beauty and appreciate it fully.

So how's the journey going?
So far so good. I'm a third of the way and can hardly believe it. The first days were really tough. I wasn't used to heavy loads, lugging 22kgs up windy paths, tough paved roads or dirt tracks. I've found walking along the paths, even though tougher physically, to be easier mentally. Actually even the mental aspect is fine. I'm focused on my goal and am enthusiastic and excited about what lies in store. I only had some negative thoughts for a couple of days, due to the poor weather, when I kept asking myself "So how long are these 80 days?" But the thought that is constantly on my mind is the happiness I'll feel at the end of the trip, when I can finally say, "I've fulfilled my dream." This gives me strength and the certitude that I can do it.

Tell us about some encounters
I meet lots of people and whenever I've got enough time to explain what I'm doing, everyone is always very curious, caring and helpful, each in their own way. The fact that I'm traveling alone, for such a long time, with heavy rucksack is fascinating and often people are a touch envious, or they want to try it, too. One special encounter was at Forni Avoltri, with the pilgrims to the Sanctuary of Our Lady of Luggau. We ate, drank liquor and chatted for a long time. Another meeting was with an old man in some alpine pasture in Austria. When he saw me he went into his house and came out again with some cherries.

What did you expect to find that you didn't?
Honestly, I thought I'd have better weather. Instead, what I didn't expect to discover was the enormous damage caused by this winter's snowfall. Especially in Slovenia and in Carnia. Devastated forests, destroyed paths, lots of snow and debris still chocked up in the avalanche gullies and lots and lots of destruction everywhere.
Compared to how one usually walks in the mountains - you climb a peak and then often descend via the same route – I've learnt about a new form of joy and satisfaction, linked to the beauty, curiosity and pleasure of discovering what lies beyond the next step, valley and hill. This means you head in one direction, with a completely different mindset that provides both continuity and communication.

Before you fall asleep in your tent at night, what do you think about?
I generally think about what happened that day and I jot down what I remember in my diary. During those few days which were difficult, really difficult, I'd think about what obstacles might lie in wait the next day. But then everything worked out smoothly, just like today, another great adventure, and I'm happy.

So what differences have you noticed in the mountain ranges you've crossed so far?
From the morphological point of view I was impressed with the famous Karst holes and the lack of water, which I was aware of. But I didn't imagine I'd feel so amazed when, after 10 days, I heard the sound of gushing water in the streams. In the mountains water is always my traveling companion. What also fascinated me in the Karst and Triglav area were the weathered rocks, fissures and cracks that I associated the crevasses of glaciers, of course, on a much smaller scale. From a cultral perspective it was highly informative to switch from a "green country" such as Slovenia - wonderful thanks to its vast forests where man still seems nature's guest - to parts of the South Tyrol, where the man has put nature at its service and enjoys the benefits of exploitating it for agriculture and tourism.

The interview, for now, ends here. We say goodbye to Ivan with a touch of envy, too. His description of the trip and his enthusiasm are contagious, the desire to quit everything we're doing is stronger than ever before. We leave Ivan to his evening chores and promise to meet up again for another chat, before he completes his dream. Meanwhile, you can follow Ivan's progress and communicate with him directly via his facebook page Across the Alps.