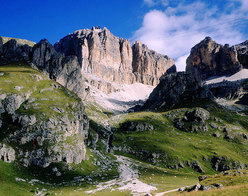 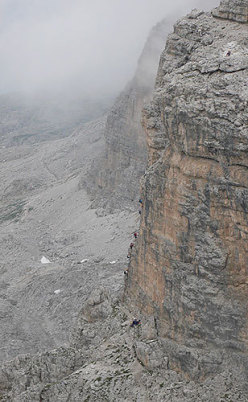 Four treks and vie ferrate to discover the Sella, Pordoi and Val Badia in the Italian Dolomites by local Mountain Guide Francesco Tremolada.

The Sella massif is one of the most famous and popular mountain chains in the Dolomites thanks to its spectacular views, intricate network of paths, mountain huts, vie ferrate and above all thanks to ease of access by car.

To visit the Sella and get to know it "from a different angle" during your holiday we've chosen two vie ferrate which are both easy and, compared to others nearby, not particularly crowded. Both cross fabulous terrain and, forging deep into the rock faces which hallmark the Sella, lead to panoramic summits.

The hike up to the summit of Piz Boè is a must: at 3152 m this is not only the highest peak in the Sella group, but also one of the easiest 3000m Dolomite peak and, consequently, one of the most popular. This is a simple ascent but, given the altitude, it can often be cold or even snow capped.

The fourth trekking itinerary is also the easiest: a picturesque path called Viel del Pan which traverses across the shoulder that separates the Sella from Marmolada to provide magnificent views of both mountain chains.

All four itineraries are relatively simple and excellent for beginners wishing to gain some experience in the mountains. Those in search of something more demanding can easily add on some of numerous the alternative routes.

Getting there
The Sella is surrounded by 4 mountain passes and can be reached from the North, South, East or West. The itineraries start from Passo Campolongo, Arabba and Passo Pordoi which can be reached from Val Badia, Val di Fassa and Livinallongo. Arabba is located centrally and as such is an ideal base for these outings.

Useful information
Normal via ferrata kit for the vie ferrate: helmet, harness, ferrata kit which can be hired at Arabba. Seeing that these itineraries are at altitude we recommned warm clothing.