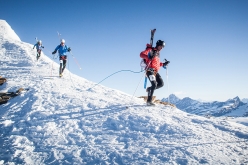 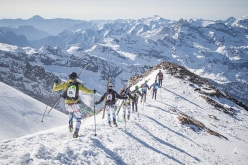 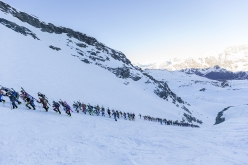 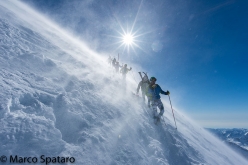 The Mezzalama Trophy 2019 has been postponed due to adverse weather conditions. The legendary ski mountaineering competition on Monte Rosa will now take place on Sunday 28 April.

The Mezzalama Trophy has been postponed for 24 hours due to bad weather on Monte Rosa, which is forecast to last until Friday. The 22nd edition of the legendary “white marathon” had originally been scheduled for Saturday the 27th of April, but will now take place on Sunday 28 April. It’s the same fantastic route through the glaciers of Valle d’Aosta, from Breuil-Cervinia to Gressoney-la-Trinité, climbing three mountains that are over four thousand metres high: Castor, Lyskamm, and this time also Entdeckungsfels on the ‘Colle del Lys’.

The announcement was made by the technical director Adriano Favre, a mountain guide who, since 1997, has been responsible for the world’s highest and most coveted ski mountaineering competition. "This morning" (yesterday, Ed) explained Favre "I examined the weather maps with the help of professionals from the Italian Meteorological Society. With an improvement expected as of Friday afternoon, Mezzalama will be able to take place only on Sunday the 28th. The break in the bad weather that we anticipate for Saturday will let us secure the parts of the route that are at high altitude, especially in the steeper sections on Castor and the Naso del Lyskamm. Around a hundred mountain guides and volunteers have been mobilised to do this job. The same individuals who, on Sunday morning, will be spread out at the checkpoints, waiting for the nearly 300 three-man rope teams from different 18 countries."

The Mezzalama Trophy, the last race of the season on La Grande Course ski-mountaineering circuit, will start from the centre of Breuil-Cervinia and finish in Gressoney-La-Trinité. The historic race, first held in 1933, is the only one in the world that is raced over glaciers; it traverses two 4000ers, the Castor peak (4226 m) and the Naso del Lyskamm pass. "This year" explained Favre "the course will go right over the summit of the Naso (4275 m), which is even higher than the Castor. But the real novelty of the 2019 edition will be a third 4000m peak. Instead of starting the descent to Gressoney immediately after crossing the Naso, from an altitude of 3900m the athletes will hike up again on their skis towards the Col de Lys as far as the Roccia della Scoperta-Rock of Discovery (4177 m). As in the 1978 edition of the Mezzalama, we want to commemorate the feat of seven mountaineers from Gressoney who first reached this rocky outcrop emerging from the glaciers between the Aosta Valley and the canton of Valais in 1778. It was a European-level expedition that took place eight years before the conquest of Mont Blanc. The seven Gressoney pioneers, commemorated by an imposing monument in Gressoney-Saint-Jean, were thus both the first to start exploring the Monte Rosa massif and precursors of mountaineering itself."

04.05.2015
XX Mezzalama behind the scenes...
The 'behind the scenes' insight written by Marco Spataro, one of the many mountain guides and pros involved in safety preparations of the twentieth edition of Mezzalama, the legendary ski mountaineering competition on Monte Rosa, won last Saturday by Michele Boscacci, Matteo Eydallin and Damiano Lenzi and by Emelie Forsberg, Axelle Mollaret and Jennifer Fiechter.

02.05.2011
Mezzalama Trophy 2011. The race, winners and a renewed competition
On 1 May 2011 the XVIII Mezzalama Trophy was won by the international team comprised of Spaniard Jornet Burgada and the Frenchmen Bon Mardion and Blanc. The women's event was won by Pellissier, Pedranzini, Martinelli. The report and excitement of the great ski mountaineering marathon on Monte Rosa, by Lorenzo Scandroglio. Portfolio by Marco Spataro.

12.05.2009
Mezzalama 2009 – an emotional story
The XVII Mezzalama Trophy took place on Monte Rosa on 02/05/2009. The legendary ski mountaineering competition was won by Manfred Reichegger, Matteo Eydallin and Denis Trento in a record breaking 4:01'22. The women's event was won by Francesca Martinelli, Roberta Pedranzini, Laetitia Roux in 4:43'31".

02.05.2007
XVI Mezzalama - the hardest ski mountaineering competition in the world
On 29/05 the Swiss-Italian trio comprised of Giacomelli - Pellissier - Troillet won the XVI Mezzalama, the most challenging ski mountaineering race in the world. The women's event was won by the extraordinary Martinelli - Pedranzini - G.Pellissier, who in doing so also set a new course record.