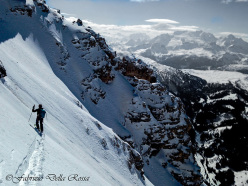 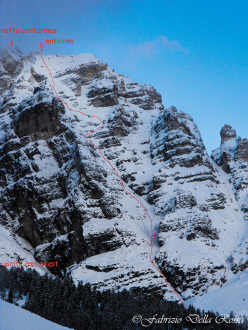 On Thursday 6 March 2014 Manuel Nocker and Fabrizio Della Rossa made what is probably the first ski descent of a new line down the beautiful and difficult West Face of Conturines, Dolomites (1400m, 1000 45-55°; AD E4). The report by Fabrizio Della Rossa.

Beautiful, intense and vertiginous. We're talking about the descent carried out on Thursday 6 March by Fabrizio Della Rossa and Manuel Nocker. The scene of it all, the wild West Face of Conturines, above Val Badia. One of the most imposing rock castles, ever beautiful and always with a thousand different faces, of the Dolomites. Della Rossa and Nocker unlocked the key to reach (with supreme intuition and not without difficulties) the start of their descent. Then, down "that sector of the face located immediately to the right of the West Gully" they skied "suspended in thin air." 1400m in total, 1000 of which between 45-55°, graded AD E4.... for what is likely to be a first descent. Because even if there are no records of previous descents, in cases like these it's never easy to be 100% certain. In any case, as is clear from Della Rossa's report, this was a truly fantastic experience and descent.

It's snowing outside and the Conturines massif, with its peaks, faces and gullies is locked in a red cloud. Now I understand the reason for this slightly sad mood: the sand of the Sahara has reached us, a weary traveler driven by melancholy winds.

Conturines, not surprisingly referred to in the plural, are an amazingly three-dimensional array of mountains: walls and gullies on every face never expose themselves clearly, resulting in a rapid succession of light and shadows at sunset: the walls seem to change angle, gullies and goulotte suddenly emerge out of the dark, peaks and towers transform from isolated gendarmes into a continuous ridge line, or in front of ledges.

This sensory disorientation provoked by the mountain did nothing but fuel and amplify my curiosity about that sector of the face located immediately to the right of the West Gully: a slope leads from the summit down to the base, marked by its outstandingly steep, continues angle. From wherever you look at it, from Badia, S. Cassiano or La Villa, it looks like the prow of a ship above the valley floor and the snow that glitters at sunset accentuates the beauty of the line. And fuels within me an unhealthy attraction.

What even binoculars fail to reveal is whether the slope can be easily reached from the summit or whether it is separated by a deep ravine. All we can do is check it our for ourselves.

We push our skis up through the huge natural amphitheater where the normal route goes. Were we to be seen from above, I think to myself, we'd seem just like grains of sand: imagine their astonishment when, after having traveled for thousands of kilometers, they escaped from the cloud only to find themselves lying in the snow, wedged into some ravine or lying along the white slopes. And we like them, small and insignificant, are determined to explore this little corner of the world, ascend ever upwards.

We reach the the large col between Conturines and Lavarella when Manuel notices what may well be the key to success: a small, snowy gully leads up from the West Gully to a saddle that separates the main summit pyramid from the pre-summit. After the saddle a short face enables us to stand on the top of the lower summit. Between us and the valley floor lies a steep 1300 meter descent, along an open, exposed face: on our first turns it seems as if we're suspended in thin air, but the snow supports us. Its good conditions allow us to make turns and have fun. Incredibly the snow weaves its way down past rock bastions, tracing a perfect line of descent. We reach the splendid slopes at the base of the mountain without ever needing the rope.

We turn around and look back at the face, satisfied: was this a first descent? Small grains of desert sand that got there a few weeks before us jadedly observe us from up above