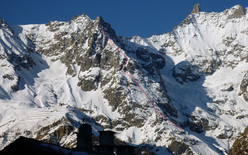 Davide Capozzi and Stefano Bigio and the first descent of the SE Ridge of Dent du Jetoula (Mont Blanc) carried out on 16/01/2012.
Photo by archivio Davide Capozzi

On 16/01/2012 Davide Capozzi and Stefano Bigio carried out the first ski and snowboard descent of the SE Ridge of the Dent du Jetoula (Mont Blanc range). Details of the ascent by Capozzi.

The Jetoula Crest is a great rock climb up the South Ridge of Dent de Jetoula 3306m, continues to Torre di Jetoula 3342m, and finishes at Aiguilles Marbrées. It's usually done in summer. We ascended and descended the SE Ridge up to Dent du Jetoula at 3200m: we set off at 6.00am from Palud, a part of Courmayeur located at the foot of the ridge.

We needed circa 5 hours to cover the 1800m altitude difference and finding our way through the lower section, past the infinite rocky steps and gullies, proved difficult. On reaching the crest we finally realised that the descent was possible, and although I had feared that we'd have to take our skis off on numerous occasions, the entire line proved skiable. We only had to walk for a few meters to climb up to a col which took us from the crest to the slopes below.

The descent is exposed throughout and the slopes are generally 40° - 45°, with some steeper sections. The snow varies considerably depending on the aspect and proved fairly difficult to ski, although the snow pack was excellent. We suggest a difficulty of 5.2 E4.

I think the route is often in condition but the real difficulty lies in finding both enough snow and cold temperatures. The ridge gets the sun practically all day long and transforms quickly. The route is very similar to the Rochefort diagonal (skied in 2006 by Remy Lecluse and repeated in 2010 by Stefano and myself) but we believe this one is harder to ski since the ridge is narrow and you're always on the knife-edge drop!


- Davide Capozzi, Extreme skiing, when falling is simply not an option