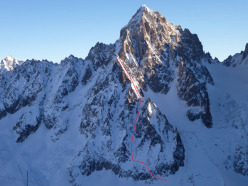 On 04/01/2013 Davide Capozzi, Julien Herry and Luca Rolli made what is likely to be the first ski and snowboard descent of the Face Sud Est dell'Aiguille du Chardonnet (Mont Blanc).

"At times all you need to do is look around, without needing to go who knows where, to make a new descent." With this in mind Davide Capozzi, Julien Herry, Luca Rolli entered the Argentière glacier above Chamonix to ascend and ski "this beautiful line which leads from the West Ridge Aiguille du Chardonnet, first down exposed slopes, then down the obvious gully (700m, 45°/50°)." According to the trio this is "the most logical and beautiful line down the entire buttress which descends from the Aiguille du Chardonnet crest.

Last year the trio had skied the gully to the left since this year's line wasn't fully in condition, and despite being one of the most visibile from the Grands Montets col, their descent (in all likelihood the first) shows just how much potential there still is in the Mont Blanc massif.