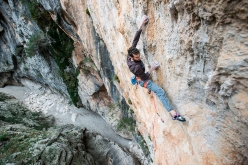 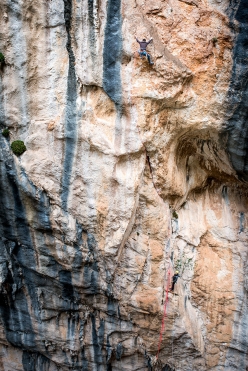 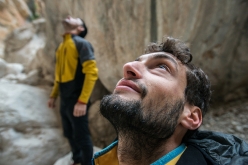 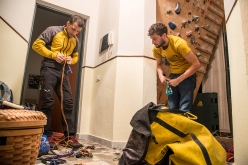 Making the most of a short trip to Sardinia, in early November 2016 Silvio Reffo climbed two of the island’s most coveted routes: Hotel Supramonte (8b, 400m) at Gola di Gorropu and Mezzogiorno di Fuoco (8b, 270m) at Punta Giradili. Both climbs were put up by Rolando Larcher and Roberto Vigiani, the former in 1988 while the latter was first ascended in 2006 together with Maurizio Oviglia who had also got the ball rolling with 'Hotel'. While ‘Hotel Supramonte' is widely recognised as one of the most important multi-pitch sport climbs in the world, the lesser known Mezzogiorno di Fuoco is just as beautiful. Reffo got his bearings by repeating Larcher’s Horror Vacui in Val d’Adige, and then first Mezzogiorno di Fuoco with Riky Felderer before repeating Hotel Supramonte with Adriano Selva. Felderer, who recently moved to Sardinia to run the Lemon House Bed & Breakfast, told planetmountain.com: "Silvio really impressed me. He fell once on both routes, and then sent the pitches second go. Always ground-up, one pitch up to the next, all the way to the summit. Impeccable style!"

Silvio, how come Sardinia? And how come multi-pitches?

A few years ago I travelled to Sardinia for the La Sportiva bloc scouting project, during which we spent an entire week cleaning and putting up new boulder problems. So this time I wanted to see some of the island’s sport climbing crags and, above all, try some of the reference multi-pitch climbs. I reckon that alpine sport climbs represent the present and future of sport climbing. I see being able to climb hard, one pitch after then next, up a massive wall as the logical progression in my own climbing. Sardinia has plenty of demanding long routes and, above all, the rock is excellent and the climbs are set in absolutely stunning locations.

Presumably you knew exactly what routes you wanted to try
Yes, before setting off I knew I wanted to onsight Hotel Supramonte. In order to do so I prepared myself by repeating some other routes established by Larcher, Vigiani and Oviglia. These names are a certain guarantee for hallmark climbs. Before trying Hotel Supramonte I decided to first check out Mezzogiorno di fuoco up Punta Giradili, to “rev” the engine.

Together with Riky Felderer
Yeah, we set off to repeat the route in a day. And I have to admit it was more demanding than I’d expected it to be, because from half-height onwards I had some pretty bad cramps. Furthermore, the bolts are fairly runout. But things went well, and apart from the second pitch I managed to onsight the entire route.

A few days later it was time for Hotel Supramonte.
The rock face is just incredible. As soon as I saw the route, I couldn’t wait to start climbing.

With another excellent climbing partner!
This time I was joined by super Adriano Selva, who proved to be fundamental to my success. He did all the hard work, such as hauling the gear and just taking care of everything except for the actual climbing.

How did things go?
It was cold and conditions were ideal: we made swift progress, one pitch after the next, apart from pitch 5 which I sent second go. Unfortunately on my onsight I inadvertently messed up the sequence and fell while grabbing the final hold below the belay.

Another two pitches then lead to the famous 'Hotel', that niche where some have bivied in the past.
before setting off I knew I wanted to bivouac in the niche, to make the ascent even more magincal. So as planned we spent the night there, in the small grotto after pitch seven. That night was incredibile. After having climbed most of the hard bits you end up wrapped in a sleeping bag (just one for both of the, Ed) savoring the starry sky and the night. Unfortunately though the wind picked up and continued all the next day. And the last pitches, despite being technically far easier, were anything but fun with gusts up to 60, 70 km/h. But we did it.

The route was first ascended in 1998. Any thoughts!
What can I say? The line is incredible, the first asentionists did a great job at discovering such a beautiful line. Apart from the difficulties, it’s considered an international reference point and well worth trying.