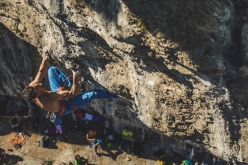 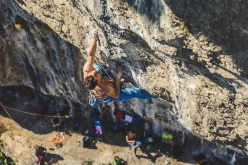 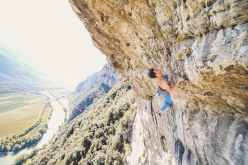 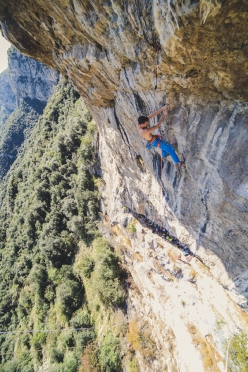 Italian climber Silvio Reffo reports about the first one day free ascent, carried out on 16/10/2016, of Horror Vacui (8b+, 180m), the multi-pitch sports climb established by Rolando Larcher in spring 2015 at the Scoglio dei Ciclopi, Monte Cimo (Val d’Adige).

It’s been a number of years since I last ventured up the rock faces in Val d’Adige, in search of adventure and the void beneath my feet. Poor weather certainly doesn’t help when trying tough projects at the crags and so this weekend I decided to return to the beautiful bastion of solid rock called Scoglio dei Ciclopi. I had my eyes set on one of the latest routes put up by Rolando Larcher, Horror Vacui that climbs the amazing cliff via four amazing, sustained pitches.

A few months ago Larcher had managed to make the first free ascent of the "easy" version, which avoided the first pitch of the original line graded 8b+; what was lacking, as he himself stated, was the icing on the cake: a single day ascent of the entire route, starting with that first pitch.

Just to make things even more exciting, I decided to try and onsight the route. As soon as the shade arrived I set off up the first pitch and almost managed to onsight it. After a short rest I set off again from the ground and this time I made no mistakes and reached the belay. I’d climbed the crux pitch, but I still had another 3/4 of the route ahead of me, with one pitch graded 8a+. After a couple of hours marked by cramps, run out climbing and outstanding rock, I reached the top of the route, having pulled off the first single day free ascent of this amazing route. As usual the abseils were done in the dark, illuminated by the light of our iPhones. Once again Brentino provided me with a great adventure.

I’d like to thank Giulio Bertola for climbing with me that day, Rolando Larcher for inviting me to try the way, Matteo Pavana for having been there with his camera during the decisive moments and all those who were there to watch and cheer me on from below.