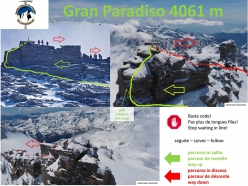 Gran Paradiso: the recommended ascent route and different descent route in order to avoid queues forming on the final meters to the summit.
Photo by Società Guide del Gran Paradiso 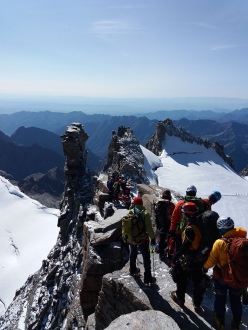 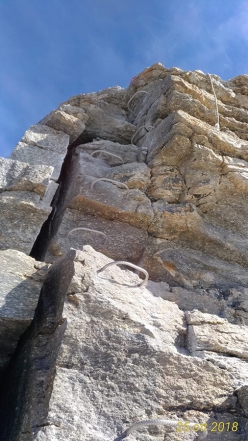 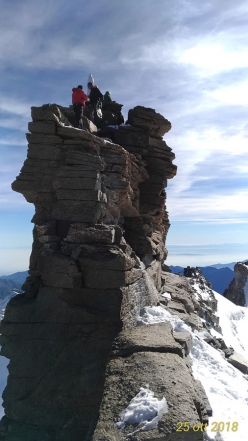 Interview with Alex Chabod, vice president of the Gran Paradiso Mountain Guides, after the decision to recommend an ascent route and a different descent route on Gran Paradiso in order to avoid queues forming on the final meters to the summit.

At 4061 meters in height, Gran Paradiso is widely considered one of the most beautiful but also one of the "easiest" 4000ers of the Alps. The mountain is becoming a victim of its own success and unfortunately queues often form on the final meters that lead to the summit, where the ridge narrows and becomes decidedly exposed. Another ascent route was established years ago but the old hemp ropes didn’t inspire confidence and consequently the line was rarely used. Now though the Gran Paradiso mountain guides have replaced these ropes with rungs and bolts and in doing so have created a circular route, with a completely independent line of ascent and descent. planetmountain.com discussed recent developments with Alex Chabod, vice president of the Gran Paradiso Mountain Guides,

Alex, if no one is on the route, the final stretch that leads to the summit can be negotiated in about 5 minutes. If there are lots of people, in the past queues of over 1.5 hours have built up!
Gran Paradiso is a beautiful mountain, not too difficult, requiring a level of expertise that isn’t particularly high. This obviously makes it very popular. The problem is that just below the summit there’s a narrow and exposed section, only about a meter wide, that becomes dangerous when there are many people. Dangerous both due to the fact that you have to wait and therefore spend more time up in the mountains than necessary, and dangerous due to the risk of being pushed accidentally by someone else in the queue. Some accidents have occurred here in the past that that’s why we decided to provide an alternative route by reequipping the old route.

Which was protected with old hemp ropes
Yes, we’ve now removed these ropes and have replaced them with some bolts and rungs. We deliberately didn't place any fixed ropes. The idea was to equip the route in order to improve safety, bearing in mind though that mountaineers should always be able to climb safely on their own accord.

So now, in order to avoid queues from forming, mountaineers should ascend clockwise
This is what we recommend, yes. Take note though, this isn’t a rule, we don’t want to put any obligations in place in the mountains. It’s only what we strongly recommend to stop people from standing in queues, so that they don’t have to pass each other at the most exposed and delicate section. It’s a recommendation, aimed at increasing the mountain safety for everyone.

So below the summit there aren’t any signs indicating which way to go
Absolutely not, no. The signs and explanations are in both Gran Paradiso mountain huts, Rifugio Chabod Refuge and Rifugio Vittorio Emanuele II.

You mentioned that Gran Paradiso is extremely popular
The mountain has become far more popular in recent years and it’s now one of the most popular in the entire Alps. Mont Blanc often isn’t in good condition, and as a result many alpinists choose to ascend either Gran Paradiso or Monte Rosa. The increase is really noticeable, and consequently these massive queues have formed whereas in the past they didn’t.

Could anyone criticise this action?
Of course, as always. But there are no two ways about it. The number of climbers attempting this mountain is far higher than in the past.

When does this clockwise ascent start?
It is already operational. The feedback we’ve had so far has been very positive. Finally, we’ve been told, something has been done to improve everyone's safety.