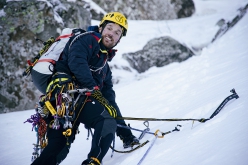 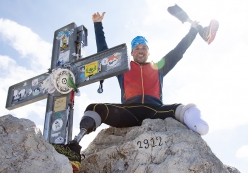 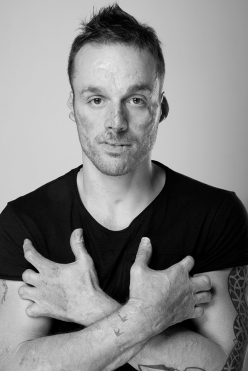 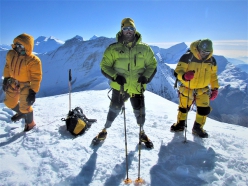 Andrea Lanfri and his Everest objective

Interview with Andrea Lanfri, the Paralympic athlete and mountaineer from Lucca recently arrived in Nepal with mountain guide Luca Montanari to attempt to climb Everest

Seven years after being forced to completely start his life from scratch after surviving fulminant meningococcal septicemia that resulted in amputation of both legs and seven fingers, Andrea Lanfri is now aiming for the highest goal of all, the 8849 meter high summit of Everest.

The 35 year old mountaineer from Lucca, Italy, has never made it a secret that he hopes to climb to the top of the highest mountain in the world and in recent years every climb, every training session, every stage of his grueling From 0 to 0 project on Gran Sasso, Etna and Monte Rosa, has been focused towards this objective.

His ascents of Mont Blanc in 2020 with fellow paraclimber Massimo Coda and, above all, the seven-thousander Putha Hiunchuli in Nepal in 2019 served as important tests to comprehend how his body reacts at altitude and see how his prostheses work in the field.

Lanfri had climbed Putha Hiunchuli with Luca Montanari, an Italian UIAGM qualified mountain guide who is currently accompanying Lanfri on this ambitious project. The two travelled to Kathmandu on the 23rd of March and will have almost three months at their disposal. Given his disabilities, just crossing the Khumbu valley and laying his eyes on Mount Everest will be a great achievement, but there can be no doubt that Lanfri will do all in his power to go way, way further.

Andrea, Everest, the highest mountain of all... Have you always dreamed this big?
No, not always. Let's say that after the illness I started to dream big! Ever since my illness I’ve decided to interpret everything as a challenge, and of course these challenges have gradually become more and more difficult. I’ve consistently pushed myself one stage further and I can literally say that over the years I’ve climbed higher and higher.

You have already been to the Himalayas, in fact in 2019 you reached the 7246m summit of Hiunchiuli in the Daulaghiri massif with Luca Montanari. How was this experience and what do you expect this time round?
2019 was my first experience in the Himalayas and on that occasion we chose a relatively unknown area of ​​Nepal; my goal was to see if I could manage the prostheses for such a long period, sleeping in a tent and walking and climbing such long distances. It was a sort of a final test which ended very positively, both on a personal level but also on a technical one, because I managed to experiment with different prosthetic solutions. I believe and hope I’ve improved a lot since then, and I certainly expect an experience as unforgettable as the one I had back then.

OK so a basic question: how did you prepare for this goal?
The quick answer? "From 0 to 0", the project I’ve had in recent years that put me in my best shape possible, physical but also mental. Anyone who knows about this project knows what I'm talking about: cycling, running and mountaineering, non-stop. It’s undoubtedly a project that has pushed me to overcome many of my limits, but also to manage the prostheses as best possible.

So can you tell us a little about your equipment? What are these prosthetic legs like?
My equipment is the normal gear that all mountaineers have. Obviously the prostheses are tailored to my body but basically I have 2 pairs. I don’r really want to describe them as "special" prostheses, it would be more correct to say that in recent years I’ve made some small modifications that work in my favour. Basically, a pair will be used for trekking and the other for mountaineering. Although at first glance they may look similar, there are some very important differences. And of course I will also have a spare pair of "feet" ... you never know what might happen!

Another stupid question, sorry ... with only three fingers, can you hold the gear properly? Ice axes, jumars, etc?
I now have what I describe as being two “iron" thumbs. After climbing with them only, and using them for practically everything, over time they have obviously become very strong. Yes, I can hold my ice axe and jumar well, when ice climbing. In cases of prolonged use and especially on steeper ground, I resort to the lanyards wrapped around the ice axe. Similar to when I climbed the Lion’s Ridge on the Matterhorn. With a little bit of imagination I can use everything I’ve got to the fullest.

You say ironically joke that your fingers won’t suffer frostbite, but we imagine that you’ll have plenty of other problems to reckon with.
Neither fingers nor toes for that matter! I think that's the only big advantage I have! There are obviously other difficulties, classic problems associated with amputations. Inflammation, injuries, bruises and stress of the stumps are factors that cannot be underestimated and therefore I’ve got a heightened sixth sense and am always on the lookout to prevent things from getting worse. I now know the warning signs that I shouldn’t ignore and I always try to prevent problems from happening, having said that, at the end of the adventure there will undoubtedly be some cuts or bruises along the way

How are you plan to ascend? What style? Supplementary oxygen? Sherpa?
I will try to climb as much as possible without O2, with I’ll always have a Sherpa with me who will mainly take care of photos and videos!

Is there anything that worries you?
The weather! Undoubtedly the weather!

What will be important?
The prostheses! Excellent management of these will be fundamental.

We obviously wish you all the best for the summit. But if for some reason you don't reach the highest point on earth, what will this expedition represent?
A first attempt. Because in that case there’ll be the second go. Like I always tell my friends: "It's all training!"

What would the summit represent?
The culmination of a dream and the tangible and practical demonstration of what I have always thought. Prove to myself and everyone that in the end you can always start anew and follow your dreams.

20.09.2021
Andrea Lanfri completes bike & climb from Genoa to Monte Rosa’s Margherita hut
As part of his 'From 0 to 0' project, Andrea Lanfri set off from Genoa by bike and climbed to the Capanna Margherita (4554m) on Monte Rosa, before returning to Genoa by bike. The Paralympic athlete and mountaineer from Lucca travelled over 470km by bike and needed just 18 hours and 7 minutes to complete the first stage from the sea to the hut.

22.06.2021
Andrea Lanfri climbs Gran Sasso d’Italia during From Coast to Coast project
Italian paralympic athlete Andrea Lanfri reports about his From Coast to Coast project he carried out on Sunday 13 June, during which he climbed to the summit of Gran Sasso d’Italia. He started at Montesilvano on the Adriatic coast and finished his journey at Ladispoli on the Tyrrhenian Sea. Over 300 km non-stop, including the ascent of Corno Grande (2912m)