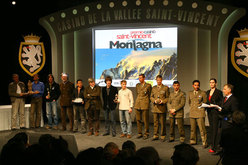 All the winners of the first edition of the Saint Vincent Award dedicated to mountain professionals.
Photo by Im Duc Young 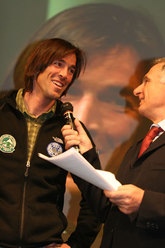 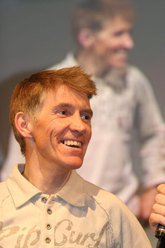 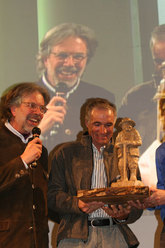 On the 7th, of March Valery Babanov, Hervé Barmasse, Ettore Taufer, Giovanni Amort, Elio Sganga and Marco Farina (Alpine Training Centre), Christophe Profit and Pemba Doma Sherpa all received their Saint Vincent Awards for Mountain Professionals in front of a packed evening audience in the Casino of the Valley.

The people who filled the Casino’s ballroom were filled with anticipation as well as a certain amount of curiosity: what was this International Saint Vincent Award all about? And what were the mountain guides and professionals in uniform who had chosen to dedicate their professional lives to the mountains being awarded for? Yes, there was an air of curiosity and expectation for this first edition. But these questions disappeared into thin air as soon as the curtain was raised. Or even better, they became irrelevant as the mountains and the men who love them took centre stage.

This is where alpinism came to life, said Luciano Caveri, President of the Aosta Region, and where mountain guiding is one of the area’s traditional professions. Gioachino Gobbi from Grivel, one of the evening’s sponsors along with the Forte di Bard and the Casino of the Valley, added that this tradition comes straight from the heart, is driven by a love for these, and the world’s, mountains. It has nothing to do with the sentimental and over-romantic love as inspired by the famous nineteenth century Italian novelist Edmondo De Amicis. On the contrary, it is all about the men and women who have chosen this difficult and unforgettable world of the high mountains.

Pemba Doma Sherpa, an alpinist born at the foot of Mount Everest who dedicated her whole life to the mountains and mountain people epitomises this figure. The Forte di Bard award “for ethics and solidarity” was created in her memory. As her husband Rajen Taapa stated: “when Pemba climbed the north face of Everest she didn’t even tell her family”. She was the first Nepalese woman to achieve such a feat, but since mountaineering at the time wasn’t considered a suitable sport for women, she practically couldn’t make her ascent known publicly.

She continued nevertheless with an ascent via the south face of the world’s highest mountain and then Cho Oyu. This was greeted by Nepal’s most prestigious award for alpinism, and followed by her “Climb High Himalaya trekking Company” and subsequent “Save the Himalayan Kingdom Foundation”, created to help the Sherpa people in terms of education and conservation of their cultural heritage. Whilst Pemba Doma’s life was a wonderful adventure, cut off in her prime at just 37 during the descent from Lhotse in 2007, her example as a women and alpinist remains an absolute symbol for all. Remembering Pemba gave rise to the longest applause of the evening. This applause sprung deep from the audience’s heart and the hope in which Pemba had always believed in.

Further testimony to one of the greats of alpinism came straight from the audience’s heart as he ascended the stage to receive the Toni Gobbi Award for the “Best performance of an alpine guide with a client”. Christophe Profit, alongside his friend Valery Guillebon, climbed the North Face of the Eiger for the 10th time last year proving that alpinism can be greater than the feat itself. “It had just started to snow and the wall wasn’t in perfect conditions, so we could have given up … but we started off all the same on our big adventure, our dream.” This unhurried dream lies in stark contrast to Profit’s previous great alpine exploits and supersonic performances such as his Petit Dru American route solo, his winter ascent of the Peuterey Crest and the trilogy on the three great North Faces: Eiger, Matterhorn and Grandes Jorasses, whilst not forgetting his new route on K2 with Beghin.

But the apparent contrast between speed and slowness is deceptive. Profit perceives the mountains as infinitely more important than just a physical performance: his values lie in the successful relationship between man and nature. His are dreams to share and live for, united by a love for the mountains’ wild natural environment. Profit has always believed in this vision, just as he has always believed in his profession as a mountain guide. A profession he loves and in which he employs not only his cutting-edge knowledge but also his human touch. Christophe is renowned for this humanity and he displayed this clearly at Saint Vincent whilst introducing his next dream with extreme simplicity: the trilogy of the three north faces as an alpine guide alongside Valery, on three difficult routes he hasn’t yet climbed. This is Alpinism which sweeps clear from preconceived ideas. Yes, Profit is a true symbol of timeless uniqueness: he fully deserved the audience’s unconditional applause.

The next men on stage were greeted with the same enthusiasm: the soldiers of the Alpine Regiment Training Centre High Mountain Group Ettore Taufer, Giovanni Amort, Elio Sganga and Marco Farina. They won the “professionals in uniform” Grolla D’Or award for their expedition to Mount Vinson. Their summit followed a 270km traverse on skis characterised by a style and attitude to the mountains far removed from the old “siege style” tactics. The High Mountain Army Group aims to repeat this experience in the future and this evolution once again honours this Regiment. With firm ties to mountaineering not only in Valle d’Aosta but also throughout Italy, these efforts must surely be encouraged.

Another example of tradition and evolution is the ascent carried out by Hervè Barmasse, the fourth generation alpine guide who was awarded the Grolla D’Or for the “finest international alpinist achievement by an alpine guide from the Aosta Valle”. His first repeat and first solitary ascent of the Matterhorn South Face Direct route, first ascended by none other than his father, represents the history and culture of generations of alpinists, not only from the Aosta Valley. Hervè reaffirmed his genetic and intrinsic relationship with the mountain which overlooks his birthplace and this handover from one generation to the next, from father to son, was carried out by the 30 year old in his own personal style and at the highest level. Hervè recently demonstrated just how deep-rooted his sensitivity for the mountain environment lies when he ascended Cerro Piergiorgio in Patagonia. But Barmasse was rewarded for the mountain which cradled and inspired him since his very beginnings, because one thing is certain: his first love, or rather, the Matterhorn’s immense south face, has always filled his horzion. Herve’s eyes shone with a smile that will be difficult to forget.

Valery Babanov wore a similar smile. He is the most western of the Russian alpinists, the only one to have received the UIAGM international Alpine Guide diploma. A brief look at the small Siberian’s climbing curriculum will make even the strongest feel fainthearted, his routes are true masterpieces. From Pamir to Mont Blanc, from North America’s highest to his favourite Himalaya, Babanov’s ascents have left their mark on alpinism. Climbing alone or with others, his alpine style mountaineering has always been distinguished by stylish fast and light. “Unfortunately there are many walls, like the west face of Makalu, that seem impossible for alpine style ascents” exclaimed Valery “but I choose to climb in the style I love most, pushing my personal limit that bit further every time I climb”. This is the absolute limit, we feel we must add. Like the limit reached when climbing Jannu’s western spur, which netted him the Grolla D’Or for the “finest international alpinist achievement by an alpine guide”. A beautiful route (in many respects a sort of university of alpinism) on a dream mountain. The ascent was carried out together with Sergey Kofanov who joined the stage with Babanov. The two were given a huge final round of applause!

The official Award ceremony was over far too quickly, but something seemed to remain suspended in mid-air. Maybe this was because all the mountaineers had revealed a glimpse of themselves, had shown that little bit extra which is needed to overcome doubts and pre-conceived ideas. The underlying feeling is that this first year sowed seeds on fertile ground, on a terrain which represents true mountain passion. Fruits must now be cultivated in the future by choosing a path that unites both the heart and mind. This may well be the only route which can pave the way for tomorrow, for everybody’s dreams.


P.S. If we hadn’t already said too much or exhausted our readers there would be much more to write. About the wonderful hospitality offered by the Aosta Valley. About Betta Gobbi and Eloise Barbieri who perfectly accompanied the journalists from Spain, Russia, Great Britian, Germany, Korea and, of course, Italy. There would be lots to say about the Alpine Training Centre and its incredible “treasures” including the carvings which illustrate mountaineering techniques. And one could mention the splendid Forte Di Bard and its Museum of the Alps: a comprehensive work displaying a huge quantity of information about the mountains (well worth visiting). And more: the climbing in the morning at Arnad. And more still: there’s a whole story to be told about the “laidback” evening entertained by Profit and Babanov. But, as we already mentioned, we don’t want to copy De Amicis….;-)