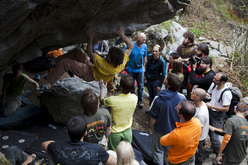 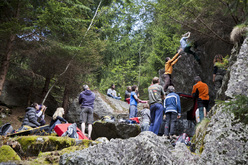 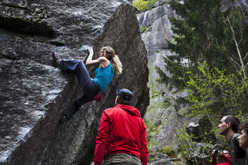 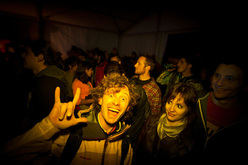 PORTFOLIO / gallery Portfolio: Melloblocco 2012 and the desire to be there

When: 3 - 6 May 2012
Where: Val di Mello / Val Masino (Valtellina, Sondrio, Italy)
What: the world's biggest bouldering meeting
Who: for all those who love bouldering, from across the globe
What for: climb the numerous boulders in the valley
Organisation: Associazione Operatori Val Masino

Melloblocco 2012 and the desire to be there

Sunday 6 May 2012. The final day of the 9th Melloblocco ended with some magic by Russian Alexey Rubtsov who managed to send, in the rain, the problem Ombre Multidimensionali. 2200 climbers took part in the event. The competition was won by Shauna Coxsey, Michele Caminati, Anthony Gullsten and Alexey Rubtsov. Despite the rain on Saturday and Sunday the world's biggest international bouldering meeting turned out to be a success. And preparations are already underway in Val Masino – Val di Mello for next year's 10th edition.

A Melloblocco marked by rain, and a Melloblocco marked by its parties and little inventions. For the second day running the Melloblockers woke up "wet" this morning in Val Masino, meaning that the weather during these last four days provided a Solomon-like draw: 2 days of brilliant sunshine, and 2 days of rain. In truth though, regardless of this outcome, there were some real winners. Namely all those who resisted in the rain and invented a thousand ways to remain in the valley, to be there until the very end. And Val Masino itself surely won, after having hosted a great party last night which united the Centro Polifunzionale della Montagna at Filorera with San Martino. This took place beneath a massive downpour which continued, incessantly, to be the (undesired) guest. So much so that in the end many didn't even notice the rain anymore, especially seeing that their desire to dance and have fun was overriding. What was also overriding was t Alexey Rubtsov's desire to climb and innate class; the Russian champion sent the problem "Ombre Multidimensionali", naturally in the rain. His performance, or rather passion, was truly spectacular and his resistance to all this rain was almost legendary!

Yesterday afternoon and last night had bidden well: some rays of sun had made their appearance, illuminating the top of the problem Quarzo Liquido which great Barbara Zangerl managed to sent, as did Olga Iakovleva from Russia. They achieved this while Melloblockers throughout the valley savoured this unexpected truce. Some balanced across the slackline. Others admired Julian Ramon Puigblanque and Sasha DiGiulian as they easily made their way across the roof of the climbing gym. Others sent some problems, went for a walk by the stream or got ready for the party. And many thought about the problems they hoped they'd send today.

Yes, a hope. Seeing that, shortly afterwards, the rain god Giove Pluvio made it clear he didn't want to leave the valley. But the Melloblockers simply shrugged their shoulders, didn't let themselves be intimidated in the slightest and after a crowded session of fantastic climbing films they threw themselves headfirst into the party. A crazy party, first to the rhythm of Vallanzaska, which then continued deep into the night. A bit of courage and sane desire to have fun is what was needed and once again the Melloblockers (including all the top climbers) proved their stuff.

Talking about top climbers. The challenge - of climbing this edition's new and extremely difficult problems - was won by Shauna Coxsey, Michele Caminati, Anthony Gullsten and Alexey Rubtsov. The young and highly talented British climber won the women's event by sending 5 problems, while Barbara Zangerl from Austria and the Russians Ekaterina Andreeva and Olga Iakovleva sent 4. Teammate Alexandra Balakireva, Anne Laure Chevrier from France and Irene Bariani from Italy all sent 3, with Bariani's performance being truly outstanding. Other outstanding climbs were carried out by the Italians Anna Borella, Giovanna Pozzoli and Daniela Feroletto, each with 2 tops.

As mentioned previously, the men's event was won by three climbers. Michele Caminati from Italy evidently reaped from his British highball experience. Mister Finland, alias Anthony Gullsten proved impeccable as always. And thanks to an incredible last-minute twist these two were joined by Russian Alexey Rubtsov, all with 3 problems sent. They were followed, with 2 problems, by the extremely strong Italian Gabriele Moroni, the Slovenian Klemen Becan, Shalgin Mykhaylo from the Ukraine and Jernes Kruder from Slovenia. Names which could easily have made the final of any Bouldering World Cup...

In the end the curtain fell onto Melloblocco number 9. This year's edition was certainly a rather different Melloblocco. Wet, but happy. With mind-blowing numbers: 2200 registered participants is an outstanding result, especially considering the poor weather forecast. Melloblocco 9 was the umpteenth proof of how important this valley and this event is for boulderers. And how much Val Masino wants it. The small and beautiful, almost epic resistance of all Melloblockers and the organisation in the valley during the last two days is proof of this. Melloblocco is here to stay. The Melloblockers want to take part in this event. And next year this will be even truer, during the long-awaited, unmissable edition which will celebrate 10 years of the world's biggest international bouldering meeting!