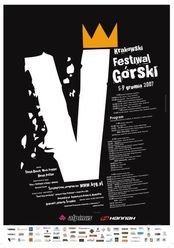 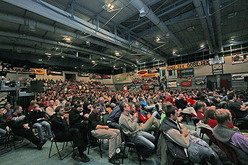 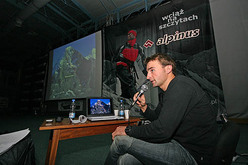 The 5th Krakow Mountain Festival will take place on 5 - 9 December and will star Steph Davis, Mick Fowler and Dean Potter.

The Mountain Festival in Krakow takes place from 5th to 9th December – it is its fifth edition and the event is one of the major festivals of this kind in Poland. It will consist of meetings with Polish and foreign climbers, mountain film shows and a variety of workshops, lectures and panel discussions.

In previous years, the Krakow Festival was visited by prominent personalities of the world climbing scene: Alex Huber, Beat Kammerlander, Marko Prezelj, Klem Loskot, Ueli Steck and Dodo Kopold. This year the Festival will star Steph Davis, Mick Fowler and Dean Potter. Leading Polish rock climbers, alpinists and himalayists will be presenting their recent achievements; among them Piotr Morawski (famous e.g. for his first winter ascent of Shisha Pangma together with Simone Moro), David Kaszlikowski (the first asentionists of lots of big wall climbs on several continents and a well-known photographer), Marcin Miotk (this year’s winner of the Snow Leopard Award), Kinga Baranowska (a leading Polish female himalayist of the younger generation), Adam Pustelnik (the maker of extreme multi-pitch rock routes) and Mateusz Ha_adaj (this year’s repeat of Biographie 8c+ in Ceuse).

Mountain film workshop, run by Marcin Kosza_ka (one of the most prominent Polish documentariests of the new generation), will be another valuable addition to the fifth Krakow Mountain Festival.

The Krakow Festival gives awards not just to film makers, but also to Polish climbers who stand a chance of receiving the prestigious “Jedynka” Award (“jedynka” means “figure-of-one” – it’s the name of characteristic Polish piton). It’s an award granted by the Polish Mountaineering Association for the finest achievements in a given year. In previous years the “Jedynka” was granted to: Krzysztof Belczy_ski, Bogus_aw Kowalski and Wojciech Wiwatowski for putting up a new route on the south face of Torre Sud (VI, A4 VI+), Piotr Morawski for the first winter ascent of Shisha Pangma 8027 m (with Simone Moro) and Kinga Ociepka for the first Polish female ascent of an 8c route (Geminis in Rodellar).

A dyno competition will be another major attraction of the Festival, and all the more so, as the unofficial female record holder in the discipline (217,5 cm) – Edyta Ropek – will be taking part in it. The event will be accompanied by a festival trade fair presenting the most recent collections of clothes and equipment by leading Polish and foreign outdoor companies, offers of travel and trekking agencies, a ski equipment trade fair and the offer of the publishers of mountain literature. There will also be workshops dedicated to mountain tourism, skiing and safety in the mountains, as well as first aid courses and presentation of the most recent technical solutions helping to increase mountain safety.