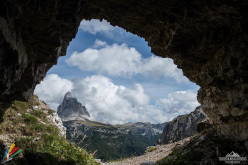 Highline Meeting Monte Piana 2015: on 10/09/2015 Jediah Doohan from the UK walked across the mountain peaks in a world record, 209m long and 100m high 1 inch wide webbing highline that took Doohan 20 minutes of intense struggle and concentration. This simple webbing became a symbol of peace: "This is not just a Highline record, we have to remember the peaks this line now connects. In this valley between Monte Piana and Monte Piano just a hundred years ago, during WWI many young soldiers died, killing each other."
Photo by Garosio Photography 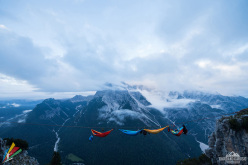 Every year Armin Holzer, Alessandro d'Emilia and Igor Scoltland spend a night on the highline. This year the three were joined by other athletes in an early morning hammock session. A total of 26 people got together to form a colourful and specifically designed rainbow of 17 hammocks. A symbol of peace and a tribute to the past.
Photo by Garosio Photography 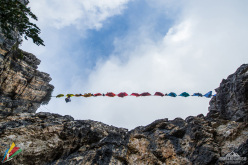 Rainbow Warriors: a total of 26 people got together to form a colourful and specifically designed rainbow of 17 hammocks. A symbol of peace and a tribute to the past.
Photo by Garosio Photography

Highline Meeting Monte Piana
An international and intercultural event that takes place above Misurina, in the Dolomites, a UNESCO World Heritage.

"Just a hundred years ago winters here were characterised by bombs, grenades and lots of pain. Our idea was to re-experience Monte Piana in friendship and in peace with each other, together with warmhearted feelings during the day, and lulled to sleep at night by a magical silence."
Alessandro d'Emilia / Armin Holzer

From 10 - 15 September 2015 the Highline Meeting Monte Piana took place close to Misurina in the Dolomites. More than 350 highliners from 20 countries participated in this non-competitive event, during which a new highline world record was set and a hammock rainbow was created to symbolise peace, to commemorate the 100th anniversary of the First World War.

The Highline Meeting Monte Piana was created in 2012 through the friendship of two highliners: Alessandro d‘Emilia (Italy), and Armin Holzer, (SouthTyrol) and their desire to share the spectacular scenery of Monte Piana (Misurina) in the Dolomites. The aim of this event is to invite professional athletes and enthusiasts from all over the world who would like to try this sport. This place not only was it chosen for its natural beauty but also for its historical importance. This area is an open air museum to honour the memory of the 18,000 young soldiers who died here during the First World War. The trenches 7 km in length are still viewable.

Program
This festival did not have a fixed program, it all depended on weather conditions and on the mood of the day: the Photo contest “Picture of the day”, inspired many participants to be creative finding a relationship between their sports performance and the topic of the day.

Hammock action
The idea of sleeping in a hammock in such an incredible place was conceived during the very first Highlinemeeting Monte Piana in 2012. Armin Holzer, Alessandro d’Emilia and Igor Scotland were so dazzled by this experience that they wanted to share it with friends. Thus the idea of a collective hammock gathering during the annual Highline Meeting on this special site was created. In the years that followed, this concept was developed further still and on September 10th 2015 this unique project took place once again for the third time. After spending the night in hammocks, the three founders were joined by other athletes in an early morning hammock session. A total of 26 people got together to form a colourful and specifically designed rainbow of 17 hammocks. A symbol of peace and a tribute to the past. This location was chosen not only for its natural beauty but for its historical importance. Monte Piana has now become a meeting point for all young people from all over the world who want to share more than a passion, a philosophy, a way of life.

The stunt was performed by a professional team of athletes and riggers. The set up had a breaking strength of >150 kN = >15 000 kg for the main line and additionally a redundant back up. Maximum force was 32 kN = 3200 kg.

A performance in honour of the location and dedicated to life

Highline World Record
On the 10th of September 2015 Jediah Doohan from Hampshire, UK walked across the mountain peaks in a world record for the longest highline (in polyester) in this beautiful landscape of the Dolomites. To walk the 209m long and 100m high 1 inch wide webbing took Doohan 20 minutes of intense struggle and concentration. This world record line was very special for Doohan, for the slackline community and for the organizers, since this simple webbing became a symbol of peace. The organizers stated: "This is not just a Highline record, we have to remember the peaks this line now connects. In this valley between Monte Piana and Monte Piano just a hundred years ago, during WWI many young soldiers died, killing each other." Where the border once was between Italy and Austria, where more than 18,000 young men fought in extreme conditions, Jediah walked across the line named "Live for love" and as the organizers further mentioned: "we all think that this is a tangible sign of love and respect for the environment and life. We also think that not only it’s time to remember but also time to react, a strong message of peace, coming from young people, in this historical moment where borders in our world are still hot and full of conflicts. Technical data. Location: Monte Piana-Monte Piano; length: 209 meters; height: 100 meters; sag: 12 meters; name: "Live for Love"; working tension: 3KN

Values and principles are shared by the participants as well as the organizers
- a non-competitive spirit and respect for the mountain so as to be in harmony with the location.
- a meeting dedicated to all fervent highliners;
- a stimulating meeting for human expressions;
- a non-competitive sports meeting to share the passion for slackline and mountains;
- an intercultural get-together meeting among young people who come from everywhere in the world;
- a meeting of awareness as regards the importance of the memory of a spot that has had a tragic history;
- an environmentally sustainable meeting, by respecting the environment, limiting consumption and allowing everyone to participate;
- a social meeting to experience for a whole week, a style of coexistence, conviviality, cooperation and solidarity;
- a meeting of ethics that becomes a lifestyle: food quality, recycling, responsible use of resources, wholesome fun in natural surroundings, music and culture;
- an international meeting, uniting young people from over twenty different nationalities in its last edition;
- a local meeting also funded by local sponsors;
- a creative meeting, allowing you to convert emotions offered by the Dolomites into creative artistic expressions;

Organization
This Meeting has been made possible thanks to the logistic support of the Municipality of Auronzo Misurina, thanks to main sponsor as Montura, Kiku, Birra Dolomiti and to the A- TEAM composed by Alessandro d' Emilia, Armin Holzer, Niccolò Zarattini, Nicolò Cadorin. The organizers provided all hospitality because there are no primary resources at 2300 meters. The spirit of non-competitiveness attracts people who want to practice highline in contact with nature, themselves and others. This year, more than 370 highliners came to Misurina from all over the world.


Portfolio: click here to see the photos of the Highline Meeting Monte Piana 2015