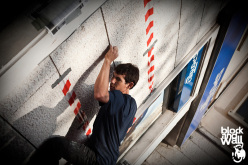 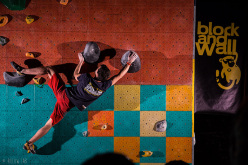 Block & Wall, the third stage of Salewa Rockshow at Trento

The third Block & Wall street boulder took place at Trento, Italy on Saturday 26 April. This was also he third Italian stage of the Salewa Rockshow 2014. The report by Team Block & Wall.

Overwhelming. This word suffices to archive the third edition 2014 of Block & Wall, the street boulder contest that took place in Trento last weekend and formed part of the Salewa Rockshow circuit. Not even a hailstorm discouraged the 350+ athletes who competed on the 46 problems set along the buildings in Trento's old town center.

For our part we are extremely happy with the result, especially considering the fact that the entire event was organised by a mere 7 people who did so out of love for climbing, and not as a full-time job. All the tricks in the book were used to make it happen. But the response of those who took part, of the city and the countless tourists that watched the event provided us with pure energy and we're already planning next year's competition and other initiatives.

This year we were finally able (after failing during the first two editions) to keep with the original date and, in doing so, the competition took place during the Trento Film Festival. Imagine everyone's astonishment when they realised that the guy sitting next to them, putting on his climbing shoes, was Alex Honnold. Invited to Trento as a member of the Festival jury, he simply couldn't resist temptation and try some of the competition problems.

Another element of satisfaction is also the technical ability of the climbers that increases every year, talented Italian boulderers have now started to compete here and proof of this could be seen in the final on Saturday: Cesar Grosso won the men's event, ahead of Ermanno Maistri and Federico Cavada. In the women's event Marion Koenig won, ahead of Maddalena Bianchi and Martina Daprà.

After cleaning the problems and restoring the buildings to their original state - part of the fundamental relationship of mutual trust we have with the owners (without which the contest could never have taken place), we have now begun to consider what new things we can offer next year, to provide the athletes with new walls and new problems to climb.