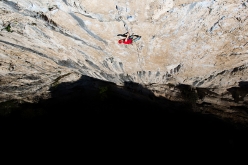 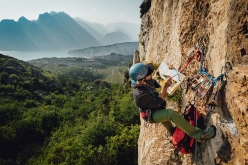 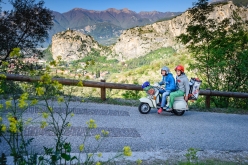 Last weekend the Italian Garda Trentino area, recognised as one of the world's climbing capitals, hosted 7 professional photographers from four European countries and 12 amateur photographers as they challenged each other in search for the best climbing photograph.

The diversity and beauty of the territory and its mountains inspired the beautiful photographs which, not without effort, the jury (composed by Emilio Previtali, Nicholas Hobley, Harald Wisthaler and the staff of Adventure Awards Days) had to judge and select in order hand out the prizes sponsored by EpicTV, Ferrino, Rock Slave as well as the cash prizes of 500 euros for the first place in the OPEN category and 1500 euros for the winner of the PRO category.

First place in the PRO category went to photographer and climber Giovanni Danieli, awarded for his ability in recounting the spirit of climbing as well s representing the athletic gesture in harmony with the territory and the landscape. Giovanni Zaccaria and Carlo Cosi were the climbers in his team. Second place went to Alex Buisse from France, third to Federico Ravassard. The OPEN category was won by Graziano Galvagni, awarded primarily for his creativity as well as for the quality of the two photographs.

The awards ceremony took place during the Adventure Awards Night, the concluding night of the Adventure Awards Days, the International Festival of Adventure and Exploration which was held on Sunday evening at Palazzo Marchetti in Arco in front a great crowd and the festival guests. These include Manolo, Michele Evangelisti, and in front of the Best Adventurer and Best Storyteller 2017 - Francesco Sauro and Robbie Shone.

The Arco Rock Star photos, thanks to the partnership with Elle-Erre, will become an Traveling Exhibit.