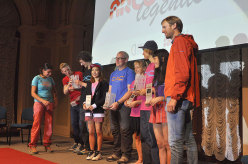 The videos of the tenth edition of Arco Rock Legends that took place on Friday 04/09/2015. The climbers for the Salewa Rock Award are Alexander Megos (winner), Angela Eiter and Ashima Shiraishi while the climbers in the La Sportiva Competition Award are Adam Ondra (winner), Jain Kim and Jakob Schubert. The third clip is dedicated to John Ellison, founder of CAC – Climbers Against Cancer who received the Dryarn Climbing Ambassador by Aquafil prize.


A day with John Ellison - founder of Climbing Against Cancer

JURY MOTIVATION
Dryarn Climbing Ambassador by Aquafil
"To John Ellison, for the courage and strength with which he interprets his life through adversity, inspiring the world's climbing community with motivation and visions that form the universal values of solidarity"

Salewa Rock Award 2015
"Freedom. Passion. A desire to explore new horizons with imagination and happiness. The climbing embodied by this climber expresses all of this. For having provided new and free visions of sport climbing, the Salewa Rock Award 2015 goes to Alexander Megos."