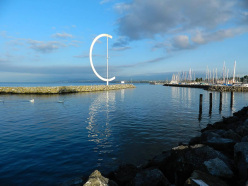 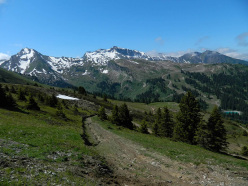 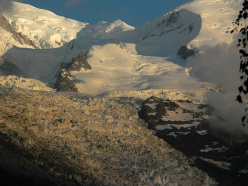 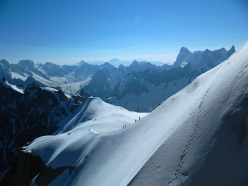 View from the Aiguille du Midi
Photo by Simonetta Radice

The Alpine Convention project, at its seventh edition, brings us through the Western region of the Alps to discover new and old issues. The first of three reports of the 20 SuperAlp! edition by our reporter Simonetta Radice.

Lausanne welcomes me in a sunny and windy afternoon, while a jazz band plays Lullaby of Birdland in the Saint Francois square. This evening I'm meeting the other participants of SuperAlp, so I just take my time to visit the Notre Dame cathedral with its wonderful and recently restored medieval polychrome sculptures. In the XVI century Lausanne hosted a large number of Italian Waldesians who had fled here to escape persecution. On August 26th 1689 a thousand of them embarked to cross Lake Leheman and return toPiedmont, starting the so-called "Glorious Return". Following the initial path of this long travel, our SuperAlp! takes off from Ouchy port heading to Evian in France. This is only the first of many boarders we're going to cross as borders, ancient roads, populations and new inhabitants are the focus of the 2013 SuperAlp Edition.

From Evian, thanks to an on-demand bus service we enter the Abondance valley to admire its prosperous pastures. Agriculture is well established here and they have been producing  the famous Abondance cheese since the fifth century. We stop at the village of Chatel, part of the Portes du Soleil skiing area that includes the famous villages of Morzine and Avoriaz. If on arrival you find yourself surrounded by bikers completely covered in mud no worries: in summer the area becomes one of the biggest mountain bike districts in Europe with 1000 km of trails surrounded by the peaks Dentes du Midi and Dentes Blanche. So now it's our turn: with take the chairlift to Chaux Fleurie and then we start our descent to emerald Lake Montrond. Downhill is a very fun sport but requires great technique: identify the right path, keep your balance backward and never stay seated in order to control your bike. I have to admit that had I not trained with my friend Mario Cossa, maybe I wouldn't still be here! And if I don't give up, mayve next year I'll take part in Pass’Portes du Soleil, a non-competitive event that involves more than 6000 bikers every year!

The Haute Savoie evokes an image of immense efficiency: on the one hand flourishing mountain-agriculture, on the other flourishing winter and summer tourism and the ability to exploit ski-lifts all year round. A perfect machine... maybe too perfect even? While I'm torn by my personal idiosyncrasies with everything that seems too flawless, I am definitely aware of how important is for mountain villages to provide a complete range of offerings to tourists. But it's time to get on the bus again and we're off to the Cluses railway station, where we will take a train to Chamonix.

The capital of alpinism – where the Alpine Convention has one of its information booths - has the honor and burden of living within a delicate ecosystem, which is also at the basis of its living (85% of local economy is based on tourism). Besides, 50% of the water coming from the Alps belongs to this region and global warming is an issue that you have to face almost daily. From the window of my hotel I see the glacier up close and think about how scary it must have been for the first inhabitants and alpinists. Suddenly it strikes me as a fragile giant.

Together with a number of initiatives put in place to promote the awareness about the environmental issues, the small village - which counts no more than 10,000 inhabitants - "“has to cope every year with up to 2 million and 700,000 tourists and 80,000 vehicles passing every day through the valley" says Bernard Prud’homme, General manager of Chamonix Tourist Office. In order to reduce the environmental impact of this intense activity a free public transportation network has been created both for tourists and residents. As a result, about 2 million people now move by bus and 750,000 by train.

It takes about 20 minutes for the cable car to pass from the 1000m altitude at Chamonix to the Aguille du Midi at 3842m. Form the terraces you can perfectly understand the expression "vertical ocean" and it's like being on a floating raft, part of a complicate game of balances. A crowded kind of raft, if you think that the cable car - working ever since 1954 - is capable of transporting up to 5,000 people per day.

So far yet so close: the Aiguille du Midi terraces are just a step from the wild lands, but the distance between me and the alpinists that climb its ice and rocks seems endless. A strange mix of wilderness and civilisation, silence and voices, a fusion between nature and technology that is somehow capable of keeping its distances. Our travels have only just begun.

First of three reports, the next will follow shortly.