► News ► Competitions ► Rock Master Lead: all the results from the Open
Versione italiana 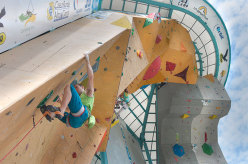 During the International Open
Photo by Giulio Malfer

PORTFOLIO / gallery Portfolio: Rock Master Lead: all the results from the Open

Rock Master Lead: all the results from the Open

Ready set go! And what a great start it was today to the Rock Master Lead! Definitely superb for Claudia Ghisolfi and Francesco Vettorata, the two Italian athletes who qualified for the Final on Saturday. Superb indeed, seeing that those gunning for this goal were 30 female athletes and 34 male athletes, and above all seeing that some of these included some absolute Lead champions.

The six who qualified from this Open, to progress on to the Semifinal, are France’s Charlotte Durif and Mathilde Becerra, Austria’s Christine Schranz, the above mentioned Claudia Ghisolfi, Slovenia’s great Maja Vidmar and Alina Ring from Switzerland. They all topped out on the first route and climbed extremely high on the second.

In the men’s competition Vettorata will no doubt be satisfied with having clipped both chains, as did the strong Mikhail Chernikov (Rus), Valery Kryukov (Ukr) and Urban Primozic (Slo). They are joined by Thomas Joannes from France and Loïc Timmermans from Belgium.

Unfortunately it wasn’t to be for the other Italians competing today, though it must be said that 16-year-old Stefano Carnati and 21-year-old Marcello Bombardi, 8th and 9th respectively, climbed outstandingly. As did 20-year-old Federica Mingolla, 18-year-old Andrea Ebner and 16-year-old Eva Scroccaro (8th, 9th and 12th respecitvely).

Tomorrow Climbing Stadium parterre will witness another Open, namely the Boulder… followed by the Paraclimbing event. This will be followed by the Arco Rock Legends, presented by Kay Rush, who will award the Aquafil Climbing Ambassador to legendary Mauro Corona, and then the La Sportiva Competition Award (those nominated are Urko Carmona Barandiaran, Sachi Amma and Dimitri Sharafudtinov) and the Salewa Rock Award (those nominated are Alexander Megos, Adam Ondra and Muriel Sarkany).