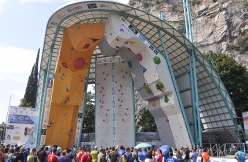 The legendary Climbing Stadium at Arco, home to the Rock Master ever since 1987
Photo by Giulio Malfer 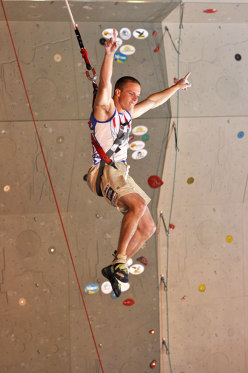 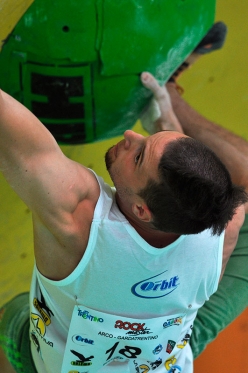 Within the context of the Rock Master Festival 2016, the Lead World Cup and the Speed World Cup now return to Italy. 199 athletes from 28 different nations will compete on Friday 26 and on Saturday 27 August at the Arco Climbing Stadium (Garda Trentino). Sunday’s competitions continue with the KO Boulder Contest and the 30th Rock Master Trophy. To cap it all, the Arco Rock Legends sport climbing Oscars are scheduled for Friday night.

The first of two long Rock Master Festival 2016 weekends begin on Friday morning, at 9:00 am sharp with the fifth stage of the Lead World Cup. After the fourth round in Imst, Austria last weekend won by Slovenia’s Domen Škofić and Austria’s Magdalena Röck, the provisional ranking is currently led by an almost unbeatable Škofić - thanks to three wins in four competitions - ahead of Austria’s Jakob Schubert, Canada’s Sean McColl and Italy’s Stefano Ghisolfi. McColl has decided not to compete in Arco and there are many who will try to capitalize on his absence, primarily France’s Gautier Supper and Roman Desgranges, seven-time Rock Master champion Ramon Julian Puigblanque, reigning World Champion Adam Ondra (who has selected Arco for his 2016 competition debut), and also Italy’s Francesco Vettorata who in 2014 came close, heartbreakingly close, to the coveted top podium place.

In the women’s field it’s Slovenia once again who’s calling all the shots with another equally impressive hat-trick scored by young Janja Garnbret who, as it happens, in Arco last year was crowned Youth World Champion. Röck and Belgium’s Anak Verhoeven are 2nd and 3rd respectively in the provisional ranking, ahead of Korea’s Jain Kim and Slovenia’s Mina Markovic. In the actual competitions the difference between these five athletes is millimetric, and the routes that will separate them in Arco will be set by Italy’s Donato Lella, Leonardo Marino and Luigi Billoro, together with Germany’s Christian Bindhammer and chief route setter Vincent De Girolamo from France.

After Friday’s qualifiers, the Lead World Cup continues with the Semifinals and then the Finals on Saturday, the day when the fastest climbers in the world spring into action in the traditional Speed World Cup. This discipline was "invented" and "sanction" on a 15m slightly overhanging race track at Arco, and while the athletes to watch out for are the current World Cup leaders - Poland’s Marcin Dzienski and France’s Anouck Jaubert - beating the stopwatch will be a major challenge. Currently the world record belongs to Ukraine’s Danyl Boldirev in 5"60 and Russia’s Iuliia Kaplina who stopped the clock after just 7" 53.

Having recuperated from Saturday night’s comp, on Sunday the best eight male and female Lead World Cup athletes take part in a competition of outstanding importance: the 30th Rock Master. From 1987 to 2016, non-stop on the green Climbing Stadium lawn, the longest-running and most famous climbing competition in the world... This year the historical trophy will assigned using the spectacular Duel formula, another Arco first. And to ensure that this will be as spectacular as it can possibly get, the organisation has assigned wild cards to ensure the following athletes will compete: Adam Ondra, Jakob Schubert, Domen Skofic, Sebastian Halenke, Janja Garnbret, Magdalena Röck, Mathilde Becerra, Helene Janicot, Anak Verhoeven, Mina Markovic and the Italians Ghisolfi, Vettorata and young Andrea Ebner.

last but not least, it’s worth remembering the appointment with Arco Rock Legends that, on Friday evening at 21.00, will celebrate its eleventh edition with the Wild Country Rock Award, the La Sportiva Competition Award and the Climbing Ambassador 2016. The candidates for the best best sport climber at the crags or in bouldering are Daniel Andrada (ESP), Jakob Schubert (AUT) and Laura Rogora (ITA), while Janja Garnbret (SLO), Mina Markovič (SLO) and Adam Ondra (CZE) are in running as last season’s best competition athlete. Competitions themselves will be recognized with the Dryarn® Climbing Ambassador by Aquafil that goes to the IFSC, the International Federation of Sport Climbing, for sport climbing historic inclusion in the Olympic Games in Tokyo 2020. Receiving the award on behalf of the federation will be Marco Scolaris who, ever since 2001, pursued with utmost determination and tenacity this Olympic dream as president of the international federation.