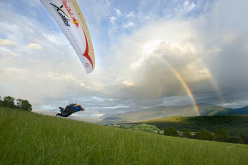 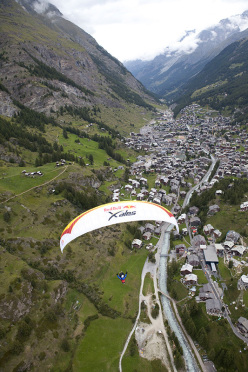 One week to go to the start of one of the most demanding challenges in the world: 31 athletes from 21 different countries will compete for over 1000, crossing the Alps from Salzburg to the Principality of Monaco. The only means of transport: their own feet and a paraglider.

An air of excitement and tension has descended on Salzburg as athletes begin to arrive for the 2013 Red Bull X-Alps, which starts on Sunday, July 7th. There is now less than a week to go before the world's toughest adventure race kicks off.

All week, athletes arrive from all over the world to the race headquarters. Unfortunately for Michael Gebert (GER1), he will not be one of them. The German athlete announced that he is retiring from the race due to a persistent ankle injury. "I tried everything but I'm simply not in condition to put up a good fight and give it my all," he said.

But for the rest of the field, they are all putting the finishing touches to their race strategies and equipment as they prepare for the epic 1,031km quest over the Alps to Monaco. Eyes will be fixed on the weather, which has seen snowfall in recent days on the mountains — and each other as the athletes size each other up.

Ahead lies a tough challenge that will test them to the limits, says Red Bull X-Alps mastermind Hannes Arch: “It's not just a physical challenge. It's about the body and the mind. The athletes have to perform for 18 hours a day and sustain that for more than 10 days. It's a real adventure!”

Athletes are not just among the world's top paraglider pilots but also adventurers with years of mountain experience. Adds Arch: “You can be the best distance pilot but you still need to have a feel for mountaineering, climbing and be totally savvy weather-wise.”

The starting gun will fire at 11.30am on July 7th in Salzburg's Mozartplatz. Fans can follow the race drama as it unfolds thanks to the latest advances in GPS technology. Red Bull Mobile Live Tracking lets fans and supporters follow the race in real time, including on smartphones and tablets. Live weather information, powered by wetter.tv, 3D maps, real-time updates are just a few of the features that will bring the race to life.