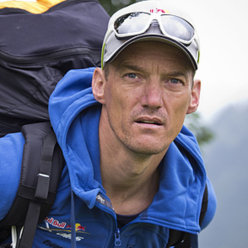 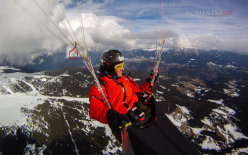 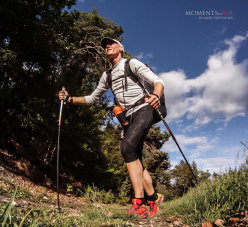 Andy Frötscher from Klobenstein (BZ) is the veteran of the Red Bull X-Alps 2013, he has competed in all editions. On July 7th he will leave for his sixth crossing paragliding and running across the Alps from Salzburg to Monaco. With Aaron Durogati and Peter Gebhard to defend the Italian colors.

Having taken past in every competition since the first edition in 2003, Andy Frötscher has become a sort of Red Bull X-Alps legend. Over the years the veteran Italian athlete has accumulated a wealth of experience which, with a little bit of luck, he will convert into victory. Frötscher's best result was in 2005 when he placed 10th, and this year the 43-year old athlete will do his very best to take advantage of his in-depth knowledge of the course and the competition by heading straight to the finishing line at Monaco.

When and why did you begin paragliding?
I started paragliding back in 1993. Together with a friend, I entered a weekend course.

What is your paragliding experience?
I was able to gain a lot of experience during flights across the Dolomites, the Swiss Alps and also over the plains of Central Germany. I also try to pass on my knowledge to other pilots by working as a guide at various flying schools as well as at meteorology and distance flight seminars.

What does your typical training week consist of?
Strength and endurance training as well as paragliding in collaboration with the department of sports medicine of the Comprensorio Sanitario Bolzano.

What are your best and worst adventure/flying moments?
There have been many great moments throughout my flying career. On July 5th, 2006, I crossed the Alpine ridge twice in one go starting in Sillian, across the Pinzgau and then back to Lienz. Definitely one of the greatest moments! One of the biggest lows was when I lost control of my paraglider as a result of an acrobatic manoeuvre in December 1995 and was only able to get out after 700m of free fall. Thanks to the emergency parachute I managed to land safely next to my friends. I was very lucky!

What are the sporting moments you are most proud of?
At the Red Bull X-Alps 2011, I had a really bad cold from the 3rd to the 5th day. However, despite a runny nose, a cough and a temperature, I managed to stay in the race and did not give up. And it was worth it! Even though I aimed higher, I am proud that I stayed in the race until the very end for the fifth time.

When and how did you first hear about the Red Bull X-Alps?
In January 2003, I stumbled across the website of the relatively unknown Red Bull X-Alps. Even back then, the new and unknown form of competition fascinated me. This fascination did not fade even though I now know exactly what the contest is all about.

What will be your strategy during the race?
To fight for every inch - both on the ground and, in particular, up in the air.
On average, over a third of the Red Bull X-Alps participants fail to finish the event. Why do you think you will make it?
I have a goal. I want to fly from Mont Gros to the harbour in Monaco and land there on the raft. My training for the Red Bull X-Alps 2013 will be even harder, more intensive and more specific. Together with my team, I want to find the ideal balance between flight training with a paraglide and the physical training in order to efficiently use the time during the competition. You always need a bit of luck as well, of course! The previous five times I was a little bit unlucky!

What scares you the most about the event?
For the Red Bull X-Alps, you find yourself in high alpine territory for very long periods, in particular when you fly. It is not always easy to ignore tiredness and physical and mental exhaustion and to stay focused, which is essential due to the difficult conditions. I hope I’m going to make the right decisions on whether to fly or hike so that I will return home safely.

Have you ever done anything of this magnitude before?
Yes, five times!