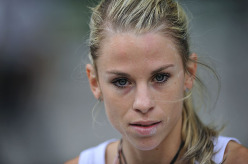 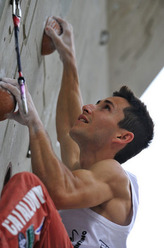 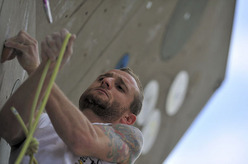 The fifth stage of the Lead World Cup took place in Puurs, Belgium last weekend and was won by Maja Vidmar and Ramón Julian Puigblanque. The two beat Mina Markovic and Johanna Ernst and Tomasz Mrazek and Jorg Verhoeven, second and third respectively.

It seems to be a rule: the World Cup Lead is decided in the space of just a few centimeters and on emotions. Last weekend's competition in Puurs confirmed that the level of the World Cup competitors is extremely high and that the number of pretenders to the throne is increasing. In the fifth and penultimate competition the Lead World Champion Ramón Julian Puigblanque from Spain won his first World Cup stage this season, beating Tomás Mrázek by two holds. Jorg Verhoeven from Holland finished 5 holds lower and third in Puurs, confirming his constant top-level performance. The race for the overall victory is led by Mrazek, followed closely by Verhoeven and now also by Puigblanque.

The women's event went right down to the wire with an emotional battle for victory: Maja Vidmar from Slovenia beat teammate Mina Markovic, Johanna Ernst from ausrtia and Caroline Ciavaldini from France all in the space of just a single hold!

Vidmar's comeback to competitions is impressive to say the least, and after gold in Bern, 3rd place in Imst and gold here in Puurs she seems to have overcome the psychological difficulties which held her back in the past. Vidmar owed her victory in Belgium to her result in the second round, seeing that the two both fell from the same hold in the final. Although it's clear that the next photofinish could go in someone else's favour, what seems clear is that Vidmar has now overcome her "fear of winning" and perhaps this is all she needed to go that one stage further. But the women's final proved even more exciting than this: both Ernst and Ciavaldini fell from the same hold as Vidmar and Markovic, but unlike the latter two they both failed to move from the hold, which meant that bronze went to Ernst thanks to her (only) top in the Semifinal.

Apart from this minimum distance between the top 4 female athletes, Puurs could be considered the "worst" competition for Ernst who, victory in the Rock Master apart, has two victories (Qinghai & Chamonix), two second places (Bern and Imst) and one third place in Puurs all in her debut World Cup season! Only a historic collapse could deny the 15-year-old Austrian of her first overall World Cup victory. Mina Markovic and Maja Vidmar trail by 114 and 160 points and will no doubt do their best to make her life more difficult. Angela Eiter did not compete in Puurs due to injury (her absence is too important to fully comprehend what future of female Lead competitions) and this, together with Akiyo Noguchi's 5th place (and third consecutive final) were the other important aspects of the stage in Belgium.

Puigblanque's victory confirmed his great form and strategically manoeuvred him into the race for overall victory, while Mrázek and Verhoeven continued in their duel for supremacy. This time it was the Czech climber who overtook the Dutchman, and this could be the sprint for victory in an attempt to repeat his 2004 performance. Things certainly won't be easy for any of them. Nor will they be easy for Patxi Usobiaga, 8th in Puurs and 4th overall, to defend his third WC title in a row. Sachi Anma from Japan has things to think about too, 5th overall but 59th in Puurs. There is only one competition left, the traditional finish in Kranj in November... this is what the Lead World Cup 2008 is all about: a marathon where victory and defeat are decided in the space of a couple of centimeters...