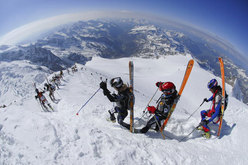 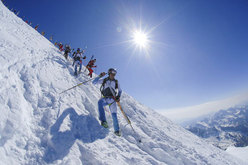 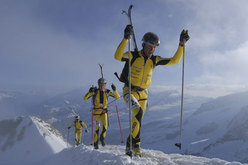 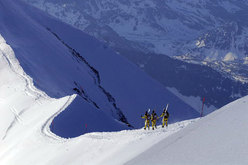 The start of the XVIII "Mezzalama" has been postponed to 05:30 on Sunday 1 May

"The weather forecast for Sunday is good" commented glacier marathon technical director Adriano Favre "on the contrary for Saturday the report is doubtful." Which means that the competition will take place in better conditions on Sunday, a very good thing seeing tha the Mezzalama unfolds on the extremely high ridge at 4000m and is, even in good weather, a supreme test for the world's best athletes only. This explains why the white marathon is more popular than ever before and has lost none of its original appeal ever since its first edition in 1933 to commemorate Ottorino Mezzalama.

So on Sunday more than 400 teams of three will tackle the 43km race course from Breuil Cervinia to Gressoney La Trinité. "The technical sections have been equipped" confirmed Favre "and the course and poles have been set. In addition, the entire course lies under a blanket of a couple of centimeters of fresh snow." Excluding the pros, most of the 1200 ski mountaineers will now begin to feel the race tension rise significantly after a year of meticulous preparation spent between work, family and extenuating training regimes.

The 2011 Mezzalama trophy acts as third stage of the most prestigious international ski mountaineering trophy, the newly founded La Grand Course. This is the turning point of the first edition of this ski alp "Grand Slam" which also stops off at the Pierra Menta (Fra), the Adamello Ski Raid (Ita), the Tour du Ruor (Ita) and the Patrouille des Glaciers (Sui). The "Mezza" will define the half-way Grande Course champions, seeing that this championship is a two-year affair which concludes at the Patrouille des Glaciers in Switzerland's Verbier in 2012. Of those in with a running chance are two former glories, Franz Nicolini and Omar Oprandi who performed well at both the Pierra Menta and at the Adamello Ski raid and are currently in the top 40 ranking out of over 400 athletes.

La Grande Course president and Mezzalama technical director Adriano Favre provided the following information which will be confirmed during Saturday evening's final briefing: "Conditons on the Castore and along all the route in general are similar to those found in summer. The recent snowfall means that, at present, there is no ice visible, but once the first 40-50 teams have passed the ice might reappear forcing all to be extremely prudent. Apart from the 24 postponement, another possibility to avoid teams from clogging up along the technical sections (such as the West Face of Castore, the traverse across the Bergschrund and the new ascent up the Lyskamm Nose) could be to let the teams depart in two separate stages: the first 200 teams at 5:15 and the remaingin 200 at 5:45. But we still need to check this hypothesis." Favre concluded "I spoke to my staff just to verify that everybody could be on the mountains also on Sunday. The availability of all the team let me postpone the race for Sunday. We are sure that we will have a great event on the first of May."

The leading teams include Damiano Lenzi - Matteo Eydallin - Denis Trento from Italy, as well as the Spanish-French team comprised of Kilian Jornet Burgada - Didier Blanc - William Bonmardion. Other Italian teams worth keeping an eye on, after the Pierra and Adamello, is the one comprised of Guido Giacomelli, Lorenzo Holtzknecht and Jean Pellissier as well as the trio Seletto - Pedrini - Lanfranchi adn the young Antonioli - Boscacci - Pinsach. Last but not least, the Swiss team comprised of Martin Anthamatten, Yannick Ecouer and Marti Marcel will have a say in the matter. In the women's event, two teams are gunning for the podium: Mireia Mirò (Esp) - Laetitia Roux (Fra) - Nathalie Etznesberger (Sui) and the Italian team Gloriana Pellissier - Francesca Martinelli - Roberta Pedranzini.

Naturally Planetmountain.com's (absolutely special) man in the field will follow the Mezzalama competition with a report and final results.