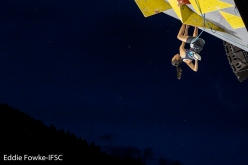 The IFSC, the International Federation of Sport Climbing, has announced the new dates of the Speed, Lead and Boulder World Cups

The IFSC Sport Department announced on Friday a series of IFSC adapted world cups for the 2020 season. It is important to note that due to possible travel restrictions no points will be attributed, including World Ranking and World Cup 2020 Ranking. No seasonal trophy will be assigned at the end of the year and, with just one competition in Europe, one in the USA and the rest in Asia, it begs the question as to how many athletes will actually attend and whether this move may be somewhat premature.

The event will be the first one to be contested under the recently updated IFSC Rules: the 1.4 version of the rulebook, in fact, includes the Addendum to the IFSC Rules to be used during the COVID-19 pandemic, a document redacted by the Climbing During COVID-19 Working Group that enlists specific guidelines and rules concerning hygiene, social distancing and the use of personal protective devices during Sport Climbing competitions.

IFSC President Marco Scolaris said: "I have seen an extraordinary willpower to move on in several organisers. We are aware of the difficulties, the challenges and the uncertainty. However, the world needs a message of hope. The health and safety of our athletes, officials, staff and volunteers will always be our top priority, but looking at the passion living in Briançon, today we are confident that, together with FFME and in full compliance with the French laws and regulations, we will be able to deliver a good competition. We trust the same could happen soon in other countries."