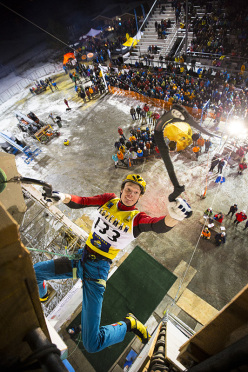 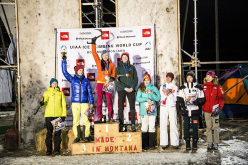 The first stage of the Ice Climbing World Cup 2016 was won last weekend in Bozeman, USA, by the Russians Maxim Tomilov and Maria Tolokonina who took gold in both the Lead and Speed disciplines.

Two athletes have laid down a marker following the first World Cup round of the 2016 UIAA Ice Climbing World Tour supported by The North Face Korea. In the highly-anticipated season opener in Bozeman, Montana, Russian athletes Maxim Tomilov and Maria Tolokonina earned the plaudits claiming gold medals in both Friday’s speed and Saturday’s lead competition. Dominating one competition is impressive enough, prevailing in both is an almost unprecedented achievement.

59 athletes from 12 countries took part in the weekend’s activities in front of a passionate and knowledgeable local crowd. The Bozeman ice climbing community had shown their solidarity in recent weeks helping rebuild the competition structure which was destroyed by hurricane force winds in mid November. The competitors were grateful for their efforts and delighted to get the 2016 UIAA Ice Climbing World Tour up and running.

Maxim Tomilov’s impressive form in the lead competition should come as no surprise. After all he is the defending champion and three-time winner. His prowess in speed (his best season finish to date a second place in 2008) marks his quest to dominate both disciplines. Maxim’s nearest rival during the weekend was his older brother Alexey, defeated in Friday’s speed competition by only a few hundredths of a second. "I was proud to face my brother in the final and felt very confident,” said Maxim.

Dominance was not only Tomilov but Russian. The podium positions in both men’s lead and speed were claimed by Russian athletes. However, the likes of Carter Stritch from the United States in speed and Korean HeeYoung Park in lead demonstrated qualities which suggest the Russian athletes will face a tougher examination in the upcoming events. The competition showcased the diverse range of athletes in attendance, from the raw potential of 17-year old Swiss climber Yannick Glathard (9th place, lead) and the guile and experience of 48-year old Russian Sergey Tarasov (5th overall, speed).

In the female disciplines Maria Tolokonina marked her return to competition (she sat out last season) in style. Tolokonina is an exceptional ice climber and a former champion in both lead and speed. On Friday she was comfortable winner of the speed competition (her last triumph in 2011) ahead of nearest rival Maryam Filippova and on Saturday dominated the lead crown she most recently won in 2014. Defending champion Angelika Rainer of Italy finished third but had been struggling with illness. Ekaterina Vlasova took silver.

Bozeman also crowned the North American champions. Sarah Hueniken and Gordon McArthur claimed gold medal in lead and the speed competition proved to be a family affair with Kendra Stritch and her brother Carter top of the podium.

"It is really fun to have trained with my brother and share the podium with him,” explained Kendra. "To be North American champion is to help grow the sport to introduce people to the fun we have here,” said Carter.

Lead winner McArthur summed up the mood of the weekend. "The atmosphere was incredible. We went from destruction of the structure to a rebuilt tower. The world came together and to see so many athletes perform at a high level is a great experience.”

Despite the impressive weekend for Tomilov and Tolokonina the season is still young and competition will intensify at the next phase of the UIAA Ice Climbing World Tour presented by The North Face Korea which takes place in Cheongsong, Korea (16-17 January 2016).