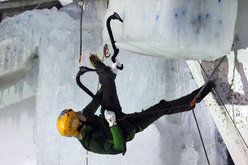 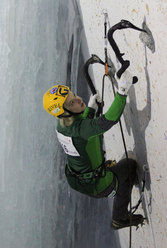 0-21/01/2012. At Saas Fee (Switzerland) Angelika Rainer from Italy and Maxim Tomilov from Russia won the second stage of the Ice Climbing World Cup 2012. In doing so they have won two events in a row and, in addition, the Swiss stage also counts as the European Championship. The Speed event was won by the Russians Alexey Tomilov and Maria Krasavina.

Second stage of the Ice Climbing World Cup 2012 and European Champion: this is what Angelike Rainer took home with her from Switzerland after her fantastic climbs which resulted, once again, in her winning the World Cup stage after last week's debut in Korea. These important titles join her 2009 and 2011 World Champion title, and Saturday's victory was the second in a row for the climber from Meran who has kicked off the season in the best way possible. The ranking sums things up clearly: Angelika Rainer 200 points, followed by Anna Galyamova and her 160 points earned thanks to her two second places. These two are the ones to watch out for and in the final Rainer climbed higher than her fiercer rival and even topped out of the route but failed to clip the final quickdraw.

The women's final route proved extremely tough with a mix of powerful moves and technical slabs which required maximum concentration. Rainer commented "Every year the athletes taking part in the World Cup get better and better, they gain more competition experience and improve their training regimes which means that the route setters (Attilio Munari and Massimo da Pozzo) need to constantly invent new problems in each competition."

Although this is Rainer's third victory in Saas Fee, things have not always turned out as hoped: during the last two editions she was beaten by a sudden fever and also an unfortunate mishap with an ice axe. "Winning in Sass Fee once again is really exciting" explained Rainer "during the qualifiers I was really nervous and I only just managed to transform my fears into power, to win what I reckon is one of the best comps in the World Cup circuit!"

The men's event was won, for the second time running, by Maxim Tomilov. The strong Russian seems to have no rivals this year and he was the only athlete to top out in the final. Once again Markus Bendler, the ex World Champion, had an unfortunate run and finished ninth overall. The speed event was dominated once again by the Russians in the form of Alexey Tomilov (Maxim's brother) and Maria Krasavina. The only other Italian in the competition, Mauro Dorigatti, finished 17th after his excellent 7th place in Korea, thereby confirming the excellent standard of the AVS Italian team. We'll continue to support them at the next event!