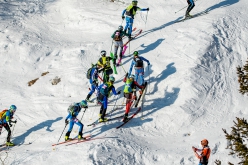 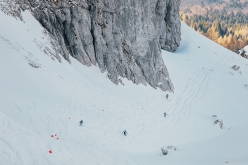 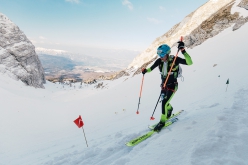 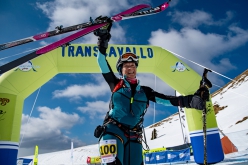 Corinna Ghirardi from Italy and Christian Hoffmann from Austria won both the Vertical and Individual races of the ISMF Master World Championships, held last weekend in Piancavallo, Italy.

The ISMF World Championships assigned the World Master titles on the slopes of Piancavallo, Italy, last weekend. The local organising committee of the famous Transcavallo event designed a varied and technical course for the Vertical race held on Friday 4 March in the Friulian ski resort. This alternated deep and more pleasant slopes, creating a real competition for master racers chasing a dream.

Inthe end, with a time of 24'50'', Christian Hoffmann of Austria was the first to cross the finish line placed in front of the Refuge Val dei Sass. The podium was completed by Frenchman Yoann Caillot (2nd place) and Nicolas Philipona of Switzerland (3rd place) closing in at 26'53''. In the women's event,  Corinna Ghirardi of Italy powered to victory. She confirmed her extraordinary ski mountaineering skills with a final time of 31'20", followed by Corinne Favre of France and Marita Kroehn of Austria.

On Sunday morning Piancavallo hosted the grand finale of the 2022 ISMF Master World Championships, the long-awaited Individual race, with a technical and challenging track embracing the two provinces of Pordenone and Belluno. Christian Hoffmann, Olympic cross-country Champion (30 km) held in 2002 in Salt Lake City (USA) and winner of Friday’s Vertical race, also dominated the Individual race with a final time of 1:33'45''. Corinna Ghirardi (ITA) also repeated her Vertical victory in the Individual discipline, stopping the clock at 1:57'10''.

The Transcavallo race Committee traced a course in the spectacularRefuge Val dei Sass amphitheatre with a total altitude difference of 1540 m and a length of about 13 km. The competitors had to face four ascents, with some alpine sections on the crest to be covered on foot with crampons on and skis on the backpacks. The course also included the Alpago area, passing through the area named Casera Palantina and Mount Colombera. The ridge of Mount Tremol, situated in the first part of the race, thrilled both the racers and the spectators who, from the arrival area, were able to admire the silhouettes of the ski mountaineers between the rocks and the sky.

The ISMF is now gearing up for the penultimate stage of the WÜRTH MODYF ISMF World Cup, scheduled to take place from 18 to 20 March in Val Martello, Italy.