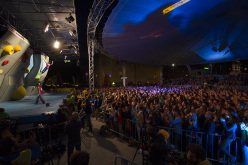 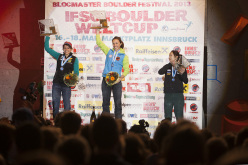 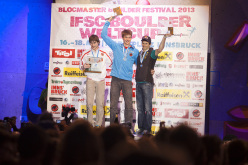 The fifth stage of the Bouldering World Cup 2013 took place on 17 ? 18 May and was won by the German climbers Jan Hojer and Juliane Wurm.

It had been on the cards for a while, a win by Jan Hojer and Juliane Wurm. The two German climbers have been improving rapidly in recent years and have earned themselves a place in the all-important Finals with increasing regularity, but despite having won bronze and silver, neither of them had ever managed to snatch gold. Until Saturday evening that is, when in the fully-packed Marktplatz in the centre of Innsbruck both finally stood at the very top of the podium, beating local favourites Anna Stöhr and Kilian Fischhuber as well as two other major contenders for overall World Cup victory, Russia's Dmitrii Sharafutdinov and Japan's Akiyo Noguchi.

To tell the truth, for his deserved victory Hojer must also thank his lucky stars, or rather, that bad weather that raged on the capital of Austria's Tyrol during the Qualification round. About halfway through the first round the pouring rain drenched the first boulder problem, forcing the organizers to eliminate this from the results which meant that the first 20 qualified on the basis of only 4 problems instead of the usual 5. The result? Hojer, one of the first to have been excluded, suddenly found himself catapulted into the semi-finals. Not wanting to miss this golden opportunity he displayed all his power and class - even finding the strength to greet the cheering audience during a climb - to win his first ever stage of the Bouldering World Cup. Hot on his heels, with four problems sent in the exciting final but (only) one attempt more than the German, was World Champion Dmitrii Sharafutdinov who in finishing second strengthened his overall leadership in the provisional rankings. Third place went to the undisputed king of bouldering, local Kilian Fischhuber who sent three problems in the final. Three proved to be the magic number for the other finalists, Canada's Sean McColl, evergreen Jorg Verhoeven and France's Guillaume Glairon Mondet: this trio sent three problems each and they were consequently separated by the number of attempts needed to reach the bonus zones. It's worth noting the excellent performance of Stefan Scarpieri who, competing against 68 other athletes, was first excluded from the finals but in great company... the young Italian tied for seventh with another Austrian ace, Jakob Schubert. While Stefano Ghisolfi had certainly hoped for a better result, as had the other Italian Rudi Moroder; they finished 45th and 51st respectively.

If it's true that Hojer must thank his lucky stars, it's equally true that a little bit of luck is often a decisive factor in bouldering and guessing who will win is never easy. Who, for example, would have hedged their bets on Juliane Wurm winning on Saturday night? Very few probably, seeing that seven days ago at Log-Dragomer in Slovenia the German scraped into 31st place. But this is what bouldering is all about, sometimes a little nothing makes all the difference and in Innsbruck Wurm demonstrated all her strength and finesse to dethrone, in a tense war of nerves, the queen of bouldering within her own kingdom. After four straight wins this season, unbeatable Stöhr had to "settle" for second place because of just one attempt more but on the basis of her genuine smile, she was more than happy for her silver and her friend's first victory. Japan's Akiyo Noguchi followed with 3 problems sent, the same number as France's Melissa Le Neve (4th), while the other two Japanese in the final - Momoka Oda and Aya Onoe - sent 2 and 1 problems respectively. Among the Italians, Jenny Lavarda placed 15th, Annalisa De Marco 20th, Andrea Ebener 21st and Giulia Alton 39th.

The next stage of the Bouldering World Cup 2013 will take place in Toronto, Canada on 1-2 june.