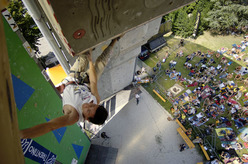 Ramon Julian Puigblanque, winner of the Rock Master 2005 and 2006
Photo by Giulio Malfer 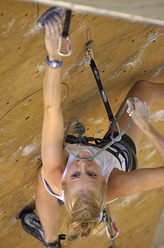 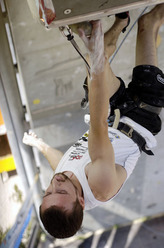 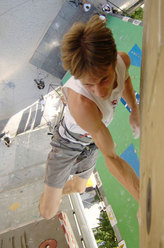 Arco Rock Master 21 and Arco Rock Legends: read before use

On the eve of the 21st Rock Master it's definitely worth repeating: you simply cannot miss the world's most famous climbing weekend on 8 and 9 September...

Why not seems almost too obvious seeing that, year in year out, the same reasons convince thousands of fans to flock to Arco for the competition dedicated to the best sports climbing champions in the world. It goes without saying that an event which has lasted this long must have something truly special about it. Perhaps it's the breeze which blows across Lake Garda, or the two day non-stop competition reserved for the best of the best, or perhaps it's simply the ritual of meeting friends and climbing on the infinite number of rocks in the Sarca valley. Whatever the reason, Rock Master is an annual occasion to watch a host of special competitions, get together and do some great climbing. This event continually proposes something new, starting with the Arco Rock Legends on Friday evening 7 September. The program then continues with the classic Rock Master competition, the Sint Roc Boulder Contest and Speed event. Arco will have it all. But let's start at the very beginning, which seems a very good place to start.


ARCO ROCK LEGENDS, THE CLIMBING OSCARS - Friday 7 September
The Arco non-stop event kicks off on Friday evening with Awards Ceremony dedicated to the second edition of the sports climbing oscars, ie the ‘Salewa Rock Award’ and the ‘La Sportiva Competition Award’. The event, promoted by the Arco Rock legends Association and its president Giuseppe Filippi, proved to be extremely successful during last year's debut and once again the candidates are some of the world's best. In 2006 the Jury comprised of 15 international climbing magazines deliberated between Manolo, Hirayama, Bereziartu, Andrada and Sharma for the Salewa Rock Award (single pitch sports climbing), while Eiter, Crespi and Mrazek were in the hotseat for the ‘La Sportiva Competition Award’. In 2007 the international jury will have to decide between the likes of Patxi Usobiaga from Spain, Adam Ondra from the Czech Republic, Andreas Bindhammer from Germany and the two Americans Daniel Woods and Dave Graham for the rock award which, unlike last year, also includes bouldering. In the running for the Comeptition Award are last year's winner Angela Eiter, her teammate David Lama and Patxi Usobiaga, the only athlete to be nominated for both categories. Last year was won by Bereciartu and Eiter and this female victory was no doubt great news compared to the usual trend. This year the most obvious novelty is the fact that two extremely young climbers of the future have been nominated, like the 17 year old David Lama and 14 year old Adam Ondra... But we daren't make any predictions; we'll know more on Friday evening. One thing is certain: the evening hosted by Kay Rush will be a way to celebrate not only these champions but also sports climbing as a whole. Obviously there will be some "speical effects" such as a film interpreted by the nominees and the participation of almost all those who love this sport.


ON SIGHT AND AFTER WORK, THE ROCK MASTER CHALLENGE - Saturday 8 and Sunday 9 September
Men's comeptition. Let's say it straight off: this year's starting grid is impressive to say the least. This is the Rock Master formula: since the outset only the best in the world are invited to compete here. So all the world's best will gather under the massive overhang at the start of September. Jorg Verhoeven from Holland, the current leader of the World Cup 2007, will battle it out against some super climbers, first amongst which is Flavio Crespi from Italy. Fresh from victory in Chamonix and second pace in China, the Italian champion will no doubt try to capitalise on his excellent form to bring home that Rock Master which no Italian has yet won. His will be a competition within the competition, chasing the legends. Last year's winner of the World Cup 2006 Patxi Usobiaga from Spain will race for victory too, in the hope of emulating his teammate, fiend and rival Ramon JuliÃ©n Puigblanque who has won the last two competitions in Arco and who now hopes for a magic hattrick. Tomas Mrazek has competed here 6 times, won once and always hit a podium place. Seeing that reigning world champion has also just won the latest World Cup in China, it goes without saying that this unpredictable champion must be considered one of the super favourites. As must Austrian David Lama, the youngest male athlete (just 17) and certainly, despite underpar performances in the last World Cup rounds, one of the most talented for the future. The remaining athletes competing for the XXI Rock Master are Sylvain Millet e Fabien Dugit from France, 18 year old Felix NeumÃ¤rker from Germany (2nd at the recent youth World Championship) and Christian Bindhammer from Germany who with 9 competition appearances and one victory (in 2000) can rightly be considered a Rock Master veteran. So too can Luca Zardini at his 12th appearance after a splendid performance in 2006 Luca "Canon" Zardini had announced his retirement from the Rock Master... but at 35 years of age he simply couldn't say no to the organisers, also because he's still a player in the current World Cup ranking. His is a true love for sports climbing and a also a massive gift to all the fans.

Women's competition. How will the battle between Angela Eiter fom Austria and Maja Vidmar from Slovenia end? It's no longer a secret that the duel between these two dominators is now coming to a head. On the one side there is Angela Eiter, the undisputed queen of competitions, the World Champion, leader of the World Cup, winner of three Rock Masters and already a fixed name in the world's hall of fame... On the other side there is the emerging Vidmar who, now like never before, seems to have all that is needed to beat her rival in this difficult and prestigious competition. In truth the Slovenian almost managed to win in 2006, but Sandrine Levet from France usuerped the two pretenders to the throne winning her second ever competition in Arco. No doubt she too will attempt to make a hattrick in 2007: the battle for victory is wide open. The challenge will be rendered even greater with the likes of 23 year old Jenny Lavarda from Italy, Nataljia Gros and Mina Markovic from Slovenia, the Austrians Katharina Saurwein and Barbara Bacher, the American Emily Harrington, Swiss Alexandra Eyer and Irati Anda Villanueva from Spain and the impressive 17 year old Charlotte Durif from France

SINT ROC BOULDERING CONTEST AND SPEED
After Saturday's on-sight the competition continues with the Speed event at 20.15. Those racing for victory are Tomasz Oleksy from Poland, Sergey Synitsyn, Eugeny Vaitsekovsky, Anatoly Skripov and Alexander Pechekhonv from Russia, Manuel Escobar, Nestor Carvajal and Leonel De La Salas from Venezuela, Csaba Komondi from Hungaria, Libor Hroza from the Czech Republic, Lukasz Swirk from Poland and Matthias Schmidl from Italy. At 22.45 it will be high time for the Sint Roc Boulder Contest and the boulderers: Kilian Fischuber, Gabriele Moroni and Lucas Preti, Nalle Hukkataival, Gareth Parry, Daniel Woods and Ludovic Laurance. On Sunday at 14.00 the women's boulder competition will take place with Olga Shalagina, Julia Abramtchouk, Silvie Raifova, Samantha Berry, Anna Stohr and Roberta Longo.
NB: The Italy - France qualification match for Euro 2008 will be screened on a MaxiTV on Saturday in between the Speed competition and the men's Sint Roc Boulder Contest.