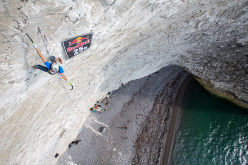 The dry tooling climbing competition Red Bull White Cliffs 2015 took place on 3 and 4 October 2015 on the Isle of Wight, England and was won by Tim Emmett (England) and Angelika Rainer (Italy). The report by Marco Servalli.

This weekend the invitation-only dry tooling competition Red Bull White Cliffs 2015 took place on England’s Isle of Wight. The chalk is extremely brittle and the only way to climb these sea cliffs is with ice axe and crampons.

The peculiarity of this competition, as well its height and the duration of the climb, is that the athletes have to lead a 90m route, clipping each quickdraw that is secured to two warthogs, a sort of long ice screw ideal for this type of rock. Scratchell's Bay acted as a wonderful backdrop to the fascinating competition, rendered even more beautiful thanks to unusually good weather on the island.

The men's competition was highly fought out and the top three climbed the ninety meters within three seconds of each other, an astounding fact considering that the route took more than 16 minutes to climb. England’s Tim Emmett won after 16 minutes and 48 seconds, followed just two seconds later by France’s Jeff Mercier. Russia’s Alexey Tomilov placed third and he could have won, seeing that he reached the top two seconds faster than Emmett, but he forgot to ring the bell and placed third

The women's competition was photocopy of Saturday’s qualifiers, with Canada’s Sarah Hueniken slotting in third after 29 minutes, Korea’s Han Na Rai Song finishing second in 24 minutes, and Angelika Rainer winning the event by stopping the clock after 21:33 minutes.

Jeff Mercier, the art of falling, by Sandy Allan