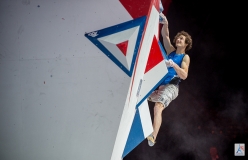 The video of Adam Ondra who in 2016 at the Bouldering World Championship in Paris invented a static sequence to avoid a huge dyno and win the silver medal.

Every athlete’s nightmare is failing to figure out how to do the moves. And every route setter’s nightmare is that an athlete invents a completely new way of doing a particular sequence. Precisely this situation arose in Paris four years ago during the biggest competition of the season, the 2016 World Climbing Championships, when Adam Ondra found himself stuck in considerable difficulty. Dynoes aren’t his forte. But sensing the unthinkable is. Watch this "beta break” to see how Ondra claimed silver behind Tomoa Narasaki and ahead of France’s Manuel Cornu.