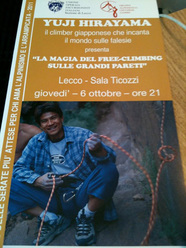 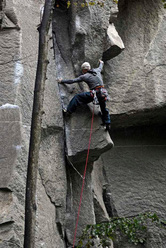 During a brief trip to Italy the Japanese climber Yuji Hirayama visited the crags Discoteca, Cadarese, Valle dell'Orco and Balmanolesca in search of Italian trad.

He was in Italy on behalf of the Gamma di Lecco Mountaineering Club , where he presented his "Magical big wall free climbs". And he obvioulsy didn't miss the opportunity to go climbing, this time choosing to check out the trad cracks close by. We're talking about Yuji Hirayama who at Cadarese in Northern Italy succeeded in the first trad on-sight ascent of Grazie Ricky 8a+, who then in Valle dell'Orco quickly repeated Greenspit before travelling to Balmanolesca where he made the first trad ascent of Profondo Rosso, a great crack line first ascended by Alessandro Manini and which now ups the grade to 8a+. Here is the brief report Hirayama sent to us.

I started at the crag called Nibbio. I went there because I only had a couple of hours to climb and I needed to recover from jet lag, being outside is the best way to recover I think. After the presentation I slowly started to concentrate on climbing and I managed to on-sight Gloria Gaynor 7b+, which felt more like 7c+, and I also sent Barry White second go. This is an ex 7b but the hold broke and it felt more like 7c+, too. Perhaps I'd celebrated a little too much after the presentation!

The next day we went to Cadarese. It was raining hard but I succeeded in the first trad on-sight of Grazie Ricky 8a+. After this I tried The Doors but I fell near the top because it was wet, but the route is very, very nice and I'd definitely like to come back to do it!

After a day off I travelled to Valle dell'Orco... obviously to try Greenspit! I failed to do it first go but... managed on my second attempt! I placed the gear while climbing and I think done like this it may be 8b+. Having said that, this is a hard route to grade.

On my last day we climbed at Balmanolesca where I sent Profondo Rosso second go. I was told this is the first trad ascent and this too is a good, physical route, perhaps 8a+ trad.

My trip to Italy was short but I got a lot of great climbing done and I saw the Italian trad scene. Every country obviously has a different approach and background. And it was very nice to see that the Italians are trying to climb cracks in better style!


The crags Hirayama visited
Discoteca (Lecco) – A small crag developed by Delfino Formenti and Stefania Pasotto on the left-hand side of Lake Lecco, with circa 25 routes from 5b - 7c+. www.delfix.it

Cadarese (Valle Antigorio) – 50 cracks from 4a onwards, located at an altitude of circa 900m, considered by some to offer the densest concentration of cracks in Central Europe. A mix of sport and trad climbs with equipped belays, a new sector has been developed recently dedicated exclusively to trad. www.ossolaclimbing.org/node/99

Balmanolesca (Val d'Ossola) – A historic crag in Valle Divedro (Valle d'Osssola) which was equipped primarily during the 1980's, with circa 50 routes from 6a to 8b on an ultra-compact gneiss. Some of the cracks are ranked as the most beautiful in the entire Ossola valley. www.ossolaclimbing.org/node/160

- Interview Yuji Hirayama, Cobra Crack and back to his roots