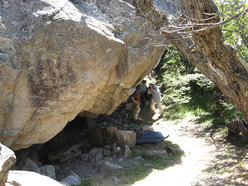 On 15 February Thiago Veloso from Brazil repeated one of the hardest problems in Latin America, Wazabi V13 close to El Chalten, Patagonia.

We usually associate El Chalten with Cerro Torre and Fitz Roy. This time though the small village isn't only the vertical capital for Patagonia's big walls, but also for Patagonia’s big boulder problems. We've now received news that one of the hardest boulders on the continent, Wazabi V13, was repeated by Thiago Veloso from Brazil on 15 February.

The problem was first ascended by Iker Pou from Spain in 2007 and is comprised of 26 moves on a 45° wall. The 23 year old stayed in El Chalten for almost two months, fighting against the usual high winds and unusual intense heat before getting to grips with the problem. Much like the mountaineers nearby.

Thiago is the first Brazilian climber to send this grade outside his country. Usually he climbs on the boulders at Ubatuba a São Paulo, Ouro Preto, Conceição and Diamantina a Minas Gerais and at Cocalzinho in Goiás. "All of this places are great and there boulders up to V12 and some projects still to be climbed... We look forward to you coming!" Is this someone's next holiday destination?