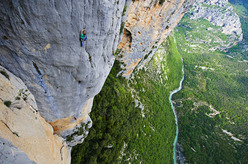 Lauren Lee high on Eve Line, an ultra classic 7b in the Verdon Gorge, France
Photo by Keith Ladzinski 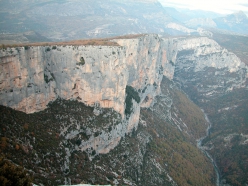 The short film 'The Verdon Gorge - The Origins of Sport Climbing' by American filmmaker Keith Ladzinski that explores the history of sport climbing in the Verdon Gorge in France through the eyes of François Guillot, Bruno Clément, Alan Carne, Matt Segal, Emily Harrington, Jonathan Siegrist.

"Our objective was to, in the summer, go to the Alps and do big ascents as alpinists. So, at that time, the Verdon was not even considered a place that was climbable. But I decided to have double-check."

These words stem from François Guillot, the famous French climber and, with Joël Coqueugniot, first ascensionist of La Demande, one of the first routes in the Verdon Gorge. The pair put up this legendary line in 1968 and it was this route, together with Les Enragès by Patrice Bodin, Patrick Cordier, Lothar Mauch and Patrice Richard, that started the vertical dance in the French gorge.

The 1970's golden age of multi-pitch routes established ground-up with trad gear gave way in the 1980's to routes being scoped by abseil and the introduction and systematic use of bolts, opening up an entirely new wave of exploration across the smooth limestone slabs. With his first ascent of Les Spécialistes in 1987, Jean-Baptiste Tribout ushered in the new era of breaching the huge overhangs.

This evolution continues to this day - only a few days ago Sébastien Bouin established DNA and claimed the world's second 9c - and part of this rich heritage is beautifully explained in this short film featuring Matt Segal, Emily Harrington and Jonathan Siegrist, as well as some of the Verdon's prime players such as François Guillot and Bruno Clément.

05.05.2022
Seb Bouin deciphers DNA, possible new 9c in Verdon Gorge, France
On Friday 29 April Sébastien Bouin made the first ascent of DNA in the Ramirole sector of the Verdon Gorge in France. The French climber has suggested the grade 9c, making it one of the most difficult sport climbs in the world.