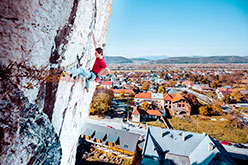 Adam Ondra making the first ascent of Absolutorium, a 9a bolted by Tomáš Pilka in 1994 at Beckov in Slovakia
Photo by Petr Chodura

The video of the first ascent of Absolutorium, a 9a freed by Adam Ondra at the end of October 2021 and bolted by Tomáš Pilka in 1994.

Adam Ondra has always had a particular interested in climbing the routes of the past. Ever since he was a little boy, he went out of his way to repeat as many milestone climbs as possible in order to fully comprehend what each generation had managed to achieve.

During his raids throughout Europe he often stumbled across lines that had not yet been freed, visionary projects bolted years earlier but simply too difficult for their time. Like, for example, Fugu, bolted by Alexander Huber at the Schleierwasserfall and freed by Ondra in 2009 at 9a, or Goldrake bolted by Bruno Tassis at Cornalba and freed by Ondra in 2010 and graded 9a+. Or Absolutorium at Beckov in Slovakia, freed by Ondra on 31 October 2021 after being bolted by Tomáš Pilka in 1994. 27 years earlier, when Ondra was still a baby.

07.04.2010
Adam Ondra, Goldrake 9a+ at Cornalba
17-year-old Adam Ondra has carried out the first ascent of Goldrake 9a+, a route bolted by Bruno "Camos" Tassi years ago at Cornalba, Italy.