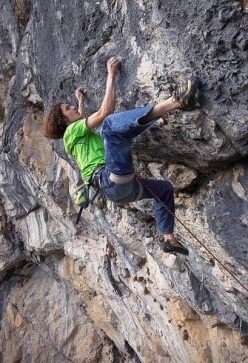 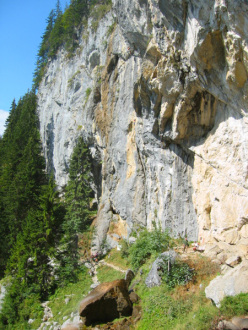 The Aquarium sector at the Schleierwasserfall, Austria
Photo by Planetmountain.com

Adam Ondra nets Fugu 9a at the Schleierwasserfall, Austria

Interview with Adam Ondra from the Czech Republic who on 20/09/2009 made the first ascent of an old Alexander Huber project, Fugu 9a at the Schleierwasserfall in Tyrol, Austria.

The latest news about Adam Ondra stems from last weekend when the 16 year old travelled to the Tyrolese Schleierwasserfall once again. After having ticked some of Alexander Huber's hardest routes - including the first repeat of Open Air 9a+, 12 years after its first ascent - last Sunday the time had come for Adam to leave his mark idellibly in Austria, too.

The input came from the man himself, from "crag guardian" Alexander Huber, who indicated a possible line, an old route which "had been a project for too long. The time had come for it to be freed finally" Alexander told us, adding "Who knows when I'll have that much time to dedicate to sport climbing, so I left the project to Adam. It's super that the Schleier has a new 9a again!"

What is superb also is that Adam seems to have taken the helm from Alexander. Only the youngster himself knows where he'll guide us. In the meantime, enjoy this brief interview.

Adam Ondra, Fugu
Hi Adam, here we go again, this time with...
Fugu - the Japanese name for a poisonous fish and famous dish for gourmets. And also the route located in the Aquarium sector: to get there you have to climb a 25m via ferrata and it's in a really airy place. The route itself is about 20m long but the exposure is tremendous. The route shares the same start as Orca (an 8c+ Alexander climbed in 2001, still unrepeated), which contain about 12m of steep 8a climbing. Just before the crux of Orca you traverse right. The traverse is the first crux, possibly a Fb7C boulder problem on slopy pockets. Then you get into bad rest and above you lies the second crux on small crimps and desperate slopers, this is about a Fb7C+ boulder problem itself.

Ritual question: how long did it take you?
It took me 6 attempts. The conditions were surprisingly bad at Schleier that weekend, as warm as in summer, just with the difference that there was less shade in the morning and evening. On Sunday morning conditions were OK thanks to the fog, but I missed my chance since I fell from the second crux with no power left. Then I tried once more uselessly in the afternoon heat. I hesitated whether to try once more or give up because I knew I'd have to wait until 17:30. In the end I decided to wait and this paid off, thanks also to some clouds which made the air a bit colder.

Is the number of attempts an important criteria?
I don't think it's that important, sometimes it's pretty much all about good luck. I have a couple of routes which I could have done second or third go and then I sent them tenth go, or haven't even sent them yet. Usually it is pretty much a mental problem then.

What does it mean to you to have freed an old Huber project?
It means a lot for me, especially since it is at the Schleierwasserfall. Every route Alex bolted is a nice line, Fugu i no exception. Every climber who repeats this route in the future will fall in love with it.

Seeing how fast you go about it, it almost seems like 9a is child's play. We know this couldn't be further from the truth. But can you put in words what it means to send 9a?
I give my climbing everything I've got. This is especially the case on Fugu where I climbed right at my present limit. If it had had just one more hard move, I would definitely have fallen. I think I climb at my limit when I want to climb a route quickly, but I'm sure I could climb harder if I dedicated more time to a route in particular.

A few weeks ago you climbed together with another expert of the hardest difficulties, Patxi Usobiaga.
Yes, I was impressed by his ability to shake out everywhere, on every small crimp. The same goes for Ramon Julien Puigblanque. My tactics are to sprint up a route, because I'm not as strong as them...


To get an idea about the exposure that Adam was talking about, check out this fantastic VR view from the nearby route Wassermusik