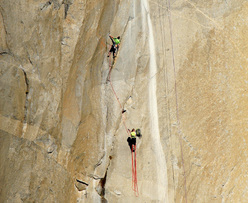 As noted last week, Tommy Caldwell was ready and poised to mount his attempt of freeing Dawn Wall on El Capitan in Yosemite. On Saturday morning he launched upwards together with his wife Rebecca since habitual climbing partner Kevin Jorgeson was out of action due to an injured ankle and he has been making steady progress.

After climbing the first 9 pitches in two days, Caldwell has now checked-in from El Cap stating that he had finally managed to send pitch 10. At least seven attempts, and the cooler temperatures of last night were needed for this monstrous pitch and the main difficulties now lie in store, with pitches 12, 13, 14, and 15 all in the region of 5.14, including the famous dyno on pitch 15. After pitch 18 difficulties ease off somewhat and the remaining pitches may possibly be dispatched in a single day.

Caldwell is one of the most successful Yosemite climbers of the last decade, with first free ascent such as the West Buttress (5.13c, 2003), Dihedral Wall (5.14a, 2004), Magic Mushroom (5.14a, 2008) as well as repeats of Salathé as well as The Nose and Freerider in a day. He has spent more than 80 days, spread out over four seasons, on this monumental climb which when free will no doubt herald a new era of difficulties in big wall climbing.

Caldwell is updating regularly via twitter and facebook and no doubt has a watchful eye on the weather which is forecast for snow and rain. Stay tuned.