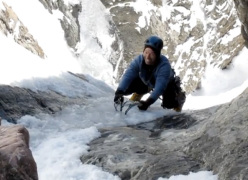 Video of a lucky ice climber, saved in extremis on Kennedy’s Gully, an ice climb at the Ouray Ice Park, Colorado (USA).

Check out this video which is working its way around the web, watched worldwide and not just by ice climbers. It documents an ascent carried out in January 2011 on Kennedy’s Gully (WI5) in the Ouray Ice Park in Colorado (USA). A leader finds himself in difficulty on dangerous ice (read about to transform into a waterfall)... Luckily help is at hand: the ice climber is saved when a rope is thrown down to him from above, seconds before the thin smear gives way beneath his ice axes and crampons. As can be seen the climber had placed a short ice screw, but according to the information available on the web, in all likelihood this would not have held his fall and the deck is 50m beneath his feet... impressive! Impressive also because of the apparent calm (you can hear the jovial voices and laughter) of the rescuing party who happened to climb just before the unlucky alpinist. But those who've experienced similar moments know that this laughter stems from something which has nothing to do with hilarity... In moments like these you need to do the right thing, quickly, and be lucky. Just like in this episode.