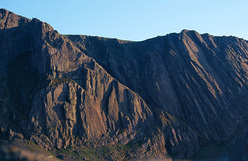 Clogwyn Du'r Arddu, Cloggy, The Black Cliff, the Shrine of British climbing. Many titles for what is widely regarded as being the best mountain crag in Britain.
Photo by Alastair Lee

The Indian Face by Johnny Dawes, the story of Britain's first E9

The video about Britain's first E9 trad climb, The Indian Face first ascended by Johnny Dawes in 1986 at Cloggy in Wales and only repeated a handful of times in over thirty years.

The trad climb that more than any other has come to represent utmost technical difficulties combined with extreme danger is The Indian Face, the huge slab on Clogwyn Du'r Arddu in Wales first ascended in 1986 by Johnny Dawes. At the time it was considered the most audacious lead ever achieved on British rock and consequently it became Britain’s first E9.

Although nowadays there are trad climbs that are technically harder, the moves up there are so tenuous, on holds so poor with absolutely minimal, runout protection, that in over three decades it has been repeated only 7 times.

This short film retraces the history of this true milestone of British trad climbing and features Joe Brown, Nick Dixon and John Redhead as well as the absolute genius who climbed it first: Johnny Dawes.