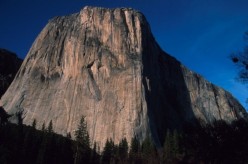 The immense SW Face of El Capitan in Yosemite Valley, USA. In the centre, the characteristic Heart formation
Photo by Chris McNamara

American climbers Mason Earle and Brad Gobright have made the first free ascent of The Heart Route, the big wall on El Capitan, Yosemite, first climbed by Chuck Kroger and Scott Davis in 1970.

American climbers Mason Earle and Brad Gobright have made the first free ascent of The Heart Route, the huge big wall that tackles the characteristic heart formation on the SW Face of El Capitan, Yosemite. First climbed by Chuck Kroger and Scott Davis over 7 days in April 1970, this line was originally grade VI 5.9 A4. Being one of the first routes on El Capitan, The Heart Route follows the bigger features of the face and provides the best chances for a continuous free climb, a fact that had not gone unnoticed by the German brothers Alexander Huber and Thomas HUber who in 2001 used the upper section of the route to create their Golden Gate.

According to climbing.com, Earle and Gobright had attempted to find a way though central section of The Heart Route five years ago but gave up due to too many "question marks". Inspired by the Dawn Wall ascent by Tommy Caldwell and Kevin Jorgeson they returned this season to work the crux pitches immediately above the heart.

Earle and Gobright spent six days freeing the line during the final push and topped out on 17 June. Earle free climbed the entire route while Gobright free climbed everything except for a long sideways dyno. The free version includes some sections of new terrain and breaches difficulties up to V10 5.13b.