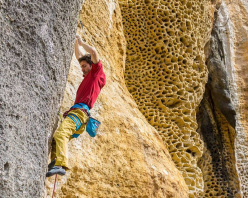 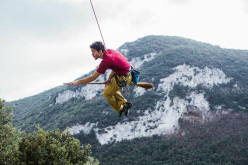 At the crag Monte Sordo in Finale Ligure, Italy, Stefano Ghisolfi has made the first ascent of Dingo. The Turin-based climber suggests 8c+ for this project bolted by Andrea Gallo in 1992.

The crag Monte Sordo, and in particular the sector Alveare, is considered one of the jewels in Italy’s high end sport climbing crowns and it was on these compact grey and honey-yellow walls that in December 1985 a 22-year-old Andrea Gallo left what is likely to be his greatest heritage, Hyaena. This sports climb was initially graded 8a+/8b due to a lack of other reference points, but was subsequently upgraded by Austria’s Gerhard Hörhager after his first repeat. And in effect thirty years down the line Hyaena is still considered a highly respectable 8b+, an obligatory climb for all those who wish to cut their teeth on the what was being achieved in those early days of sport climbing.

Immediately to the right of Hyaena lies Dingo, a route bolted in 1992 by Gallo who, after an initial courtship, turned his attention elsewhere. The route remained incomplete, attempted every now and then by other climbers to no avail, until Saturday 13 February when Stefano Ghisolfi finally took down the first ascent, grading it "only" 8c+.

The Turin-based climber had begun working the project in mid-January, when the boulder problem Gioia at Varazze he’s currently attempting was too wet, and despite his 9b curriculum (Lapsus at Andonno) Dingo didn’t give in easily.

"I know this is an old style route that doesn't suit my abilities" explained Ghisolfi "and that's why I decided to begin this battle." A fight which lasted various days, more in fact than any other 8c+ Ghisolfi has climbed previously. So much so that "despite the grade, it’s been one of the hardest mental and physical challenges" the Italian has had to deal with. Just like Gallo, on the very same piece of rock, thirty years ago.

Stefano Ghisolfi on the last hard move of Dingo, from where he fell once