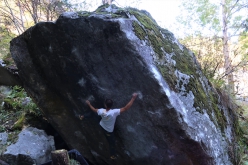 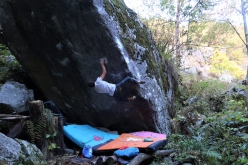 Just the other day 29-year-old climber Stefan Scarperi made the first ascent of Big Illusion, a long-standing project in Valle di Daone, Italy. The 15-move bloc up in the Dos dei Aser sector is now graded 8C and as such not only the hardest in the valley, but also one of only a handful of these difficulties in Italy.

Big Illusion in Val Daone, what can you say about it?
It’s located on one of the historic boulders, the 8A+ L’avenir nous reserve rien de bon put up by Alessandro Gandolfo. The boulder also hosts another 8A+, Big bamboo, and we’ve always know that it would be possible to connective two, and that it would be very hard.

When did you start trying it?
Last October, when I repeated the 8B stand start of this connection established by Lorenzo Puri. From then on I started trying the 8B starting moves which are the hardest. At first it seemed absolutely impossible, then winter came along and I couldn't try it anymore. Unfortunately in Val Daone the snow remains for a long time, so when conditions were finally right for me to return we were in lockdown.

You eventually returned in autumn...
In September. It was still too hot, but the sensations were good. Then in October when it cooled off I soon made some good attempts. The problem is really fingery and I couldn’t give it many tries each day. And there’s a precarious heelhook, you need to be a bit lucky for it to say put.

You graded it 8C
Let's say that for now it’s the problem I tried the most. I thought about the name because initially it felt impossible, but then as time went by I began to realise that it was feasible.

In the past you’ve climbed 8C problems like Bügeleisen in Maltatal, and you’ve also managed to flash 8B. What’s more important in your books?
A first ascent is worth much more than a flash. The process is much longer and more complicated.

What about now?
At the moment I have no big plans, given the current situation we’re all in. But I'd love to go back to Rocklands someday. And also back to Val Daone, I still have a couple of projects that I’d like to establish.

02.03.2020
Stefan Scarperi flashes 8B and repeats Bügeleisen 8B+ in Maltatal
During a three-day bouldering stint in Austria’s Maltatal, Stefan Scarperi has sent a handful of testpieces: Bügeleisen 8B+ and Emotional Landscapes stand 8B, as well as a flash ascent of Wrestling with an alligator 8B. All these boulder problems were established by Klem Loskot around the new millennium. Scarperi reports.

16.05.2015
Jan Hojer and Juliane Wurm new European Bouldering Champions
This evening in Innsbruck, Austria, the Germans Jan Hojer and Juliane Wurm won the European Bouldering Championship 2015. Silver was won by Adam Ondra from the Czech Republic and Anna Stöhr from Austria, bronze by Stefan Scarperi from Italy and Katharina Saurwein from Austria.