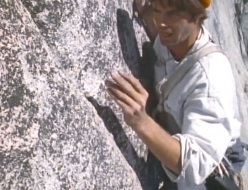 PORTFOLIO / gallery Portfolio: Solo by Mike Hoover, Yosemite and climbing in the 70's

Solo by Mike Hoover, Yosemite and climbing in the 70's

The film Solo by Mike Hoover, nominated as best documentary short for the 1973 Oscars, providing interesting insight into the meaning of climbing and mountaineering in the 1970s.

Do you have 15 minutes to spare? Sit back and enjoy, you wont' regret it. Here's Solo, the film directed and interpreted by Mike Hoover that - perhaps unique to the genre of climbing and mountaineering films - was nominated for an Oscar award in 1973. The film went on to win more than 50 prizes, including Best Film at the Trento Film Festival in 1973. Documented on 16mm film, it follows the solo climbs of Hoover in Yosemite and provides interesting insight into the meaning of climbing and mountaineering in the 1970s.