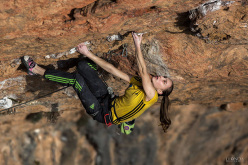 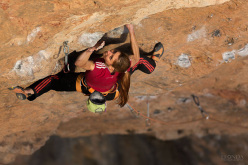 At Santa Linya in Spain Mina Markovic has repeated Fabela Pa La Enmienda 9a, Janja Garnbret has flashed Rollito Sharma 8c and Domen Skofic has redpointed Fuck the system 9a.

Slovenia's Mina Markovič and Janja Garnbret have pulled off an extraordinary feat by redpointing a 9a and flashing an 8c, both on the very same day at Santa Linya in Spain. The duo added a personal milestone to their careers, and another chapter to the history of sports climbing, by sending La Fabela Pa La Enmienda and Rollito Sharma respectively.

This is Markovič's first 9a, just three days of effort after having sent the lower section, an 8c in its own right called La Fabelita, at Christmas. For her part, Garnbret followed beta shouted to her from below to achieve what few other climbers have ever managed to do, both male and female. Possibly the first to do so was Kilian Fischhuber on Tai Chi at Austria's Lorünsersteinwand in 2004, while France's Charlotte Durif is credited with having made the first and so far only female 8c onsight, Les rois du pétrole at Pic Saint Loup in France, although this route may actually be 8b+ and not 8c... time will tell as this route is repeated more often to create consensus.

In the meantime, Slovenian teammate Domen Škofic ensured that the republic's flag flew firmly over the huge grotto with his redpoint of Fuck the system. While this unprecedented hattrick is obviously the result of years of hard training applied to raw talent, pulling off all three ascents on the same day is simple outstanding.