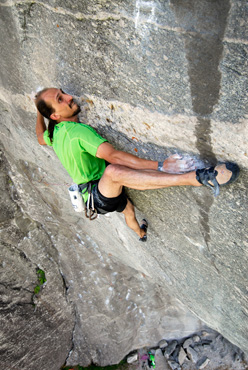 Simone Pedeferri has carried out the first ascent of Quello che non c’è 8c+, on Sasso Remenno in Val Masino. The route is an extension to "Luce di speranza" 7a+ and is, along with "Vecchio Cane stringi i denti" one of the hardest in the valley.

Pedeferri is one of the strongest and most versatile Italian climbers and when he's not busy setting boulders for the Melloblocco, he dedicates his time to climbing trips worldwide together with the Ragni di Lecco mountaineering club.

I've got a picture in my mind of a young boy's pure joy in reaching the belay on a new route. October 2009, a wet and humid day, the notes of "Quello che non c'è" sung by the AFTER HOURS drone out of my cd player, my eyes observe Sasso Remenno slowly getting wet, but beneath the north face the water isn't seeping so, like a child with a pistol, I search for holds to ascend the 50m wall since, as the song goes "at times what seems like dawn isn't".

I returned three days later with a drill and, from below, I continued up from the belay of "Luce di speranza" towards the unknown, searching for what wasn't there with my friend Sergey. But winter arrived early and the chalk on the route was substituted by drips of ice which hung down from the summit. I went off in search of warmer climbs and then, when I'd finished preparing Melloblocco 2010 and after having recovered from an injury, I was able to start climbing once again. With Sergey I bolted and freed  "Mirò" 8c and "Giuda è buono" 8b/c

Then... "when the leaves begin to get stronger I too began to feel strong... and like a child with his pistol who shoots straight from the hip... I ga ve it all I had to reach the chain of "Quello che non c'è".