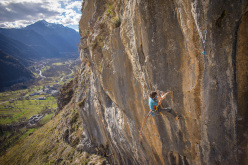 "Often you travel around the world and forget that some beautiful and historic routes are there, within reach." Bearing this in mind, at the end of October Silvio Reffo travelled to Andonno close to Cuneo in NE Italy to test himself against Noia, the legendary sports climb freed in 1993 by Severino Scassa and famous for being Italy’s first 8c+. Over the years this route has transformed into a rite of passage, a call which, sooner or later, cannot be ignored.

Although the first attempts at the end of October went well, Reffo failed to redpoint the line, confirming that even by today’s standards this route is tough and technical. Then, on Sunday 22 November, the climber of Vicenza added his name to the list of repeaters - non exhaustive - that includes the likes of Cristian Brenna (who made the first repeat in 1995), Christian Bindhammer, Andreas Bindhammer, Axel Franco, Yuji Hirayama, Rikardo Otegi, Josune Bereziartu, Alberto Gnerro, Giuseppe Nolasco, Patxi Usobiaga, Adam Ondra, Matteo Gambaro, Fabrizio Droetto and Stefano Ghisolfi . And also Francesco Bosco, the climber from Cuneowho sent the route the day before Reffo. For the record, Bosco was born in 1997, four years after Scassa’s ground-breaking performance.

To find out more check out the Climbing Technology blog