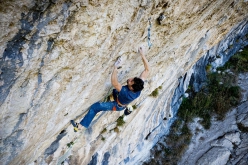 Silvio Reffo frees his Musa, a new 9a at Covolo, Italy

At Covolo in Italy Silvio Reffo has made the first ascent of Musa, a new sport climb graded 9a.

Silvio Reffo has freed his project at Covolo, the most difficult crag nestled in the hills above Vicenza in northern Italy. Reffo bolted the route last year just after Italy’s lockdown, but his initial attempts were not particularly promising as the crux sequence was way too hard.

This spring the 31-year-old returned, figured out the moves and even made some good links, but then the summer heat came and with it the end of the season. He returned this autumn and sent the line two days ago.

According to Reffo the route demands "absolute finger strength and body tension for 12 moves", translating into 9a. "Overall I think it's easier than The ring of life, but it's very compressed, in fact I think the crux sequence could be 8B boulder."

If confirmed, Musa would be the third route of these difficulties Reffo has freed at Covolo after L’Attimo 9a in 2012 and the aforementioned The ring of life 9a/+ in 2014.

14.02.2014
Silvio Reffo 8b+ onsight at Margalef
During a brief climbing trip to Spain the Italian climber Silvio Reffo has onsighted his first 8b+, Super Vixens at Margalef.