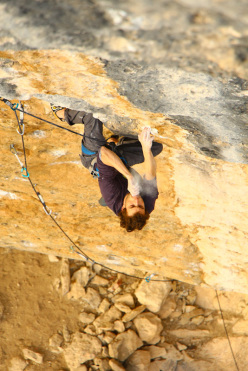 At Oliana in Spain Silvio Reffo has succeeded in flashing Mind Control.

Young Italian Silvio Reffo has saved the best till last during his Spain trip with Gabriele Moroni and now checks in with a flash ascent of the famous Mind Control at Oliana. The route was originally graded 8c+ but over the years it seems to have slipped to 8c, and Reffo himself told us that having flashed it, he felt he had to record it as 8c. But this is of minor importance since "the route remains a beautiful line."

Clearly conditions on 5 February were amazing as on the same day Garbiele Moroni sent Joe Blau, the 8c+ bolted by Joe Kinder, freed by Chris Sharma and repeated in December by Reffo. Moroni now describes it as "one of the longest routes I've ever climbed." Which isn't hard to believe since the chain is reached after linking something in the region of 95 (!) moves.